The intention behind the Safe Routes to School program is to increase the number of children who walk or bicycle to school by funding projects that remove the barriers that currently prevent them from doing so. Last year the state of California Safe Routes to School (SR2S) grant provided the city of National City with $432,000, and an additional $900,000 this year.

National City is contributing a total of $150,000 matching funds to the program, which consists of two phases.

The first phase was completed in April 2008 and the second phase should be completed by fall 2009. Ongoing public outreach and education activities are also funded through the program.

The Plaza Senior Apartments project was completed in April 2008. It consists of an 80-unit senior and assisted living development on 1.8 acres of land located on the north side of the 1500 block of Plaza Boulevard. The former site of the Ha Penny Inn and across the street from the South Bay Plaza Shopping Center. During the development of the site, the owner dedicated additional street right-of-way to facilitate the installation of a bus stop. Shoring walls were constructed to allow for the installation of 51 parking spaces and provide slope stabilization for the northerly slope. The total cost of the project was $5.8 million.

The city of National City is currently working on a $1.2 million, three-phased parks rehabilitation and beautification project at the three major parks -- Kimball, Las Palmas and El Toyon -- both in size and usage.

The park project includes painting of buildings, new park furnishings, miscellaneous upgrades/repairs of parks buildings, the recently resurfaced tennis courts in Las Palmas and El Toyon Park. The current construction consists of rehabilitation of score shacks, a snackbar and the construction of a new pedestrian walkway. Additionally, an artificial turf soccer field in Kimball Park is in the design stage. 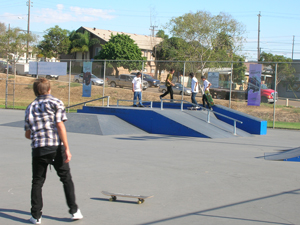 National City's long-awaited public skate park, located in the southwest section of Kimball Park, has finally arrived. With a budget of $165,000, a new skating surface, fencing, lighting repair and several skateboard components were installed in record time. Since its grand opening last September during National City Week, kids and adults of all ages have enjoyed and utilized this new park feature.

The project includes several parcels totaling approximately 11.9 acres in size and is located at 2700 E. Fourth Street. It is between Fourth Street and Eighth and west of Arcadia. The total project budget is estimated at $120 million.

The project includes the construction of approximately 752,000 square feet of building area. It will include a total of 498 residential units, including both assisted living units and independent congregate units. Also included is a Village Square building that will provide a variety of amenities and facilities for the community residents, including a restaurant. Other significant site improvements include several open space amenities for residents, including putting greens, multiple fire pits and gazebos, shuffleboard courts, bocce ball courts and community gardens.