Rustic elegance knows no limits at the Lodge

In a volatile industry where hotel chains with dire forecasts are being bought and sold, renovated and revamped to keep up with shifting consumer demands, it's nice to know a local, high-class hotel that prides itself on consistency.

That hotel is The Lodge at Torrey Pines.

"Consistent in its feel and feeling -- I think that was really a big secret" to the hotel's continued success, said Steve Pelzer, executive vice president of sales and marketing for Evans Hotels, which owns and operates the Lodge, Catamaran and Bahia resort hotels.

The Lodge is much younger than its siblings, which have both been around for more than 50 years, but Pelzer sees the Lodge's eight and a half years in business as a major asset in establishing a solid reputation and repeat clientele -- long before the recession set in last year. 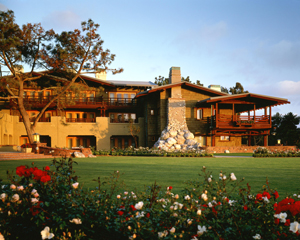 The Lodge at Torrey Pines

"Many hotels have been impacted by business travel -- we're not immune to that," he said. But he does think the Lodge is "leading the pack" through these troubled times, and that has to be attributed to the hotel's superior level of care, quality and service.

As guests enter their rooms, elements of comfort, style and luxury are working together to create a wonderful ambience that allows people to relax almost instantly.

A gas fireplace bordered by wood and aqua tiles creates the focal point of the space, where conventional hotels would normally place a TV set. Not to worry: A large screen with Internet and gaming extras is off to the side, but among such rare and unique surroundings, watching television will truly seem like more of an afterthought.

Beautiful stained glass makes its way from the lobby décor and hotel entrance to the table and floor lamps in the guest rooms. Marble countertops and leather furniture are sophisticated touches, as are the welcoming bathrobes, and slippers waiting on each side of the bed for visitors. 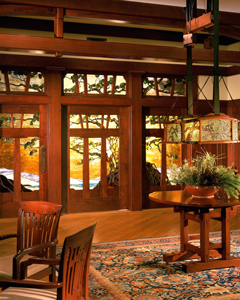 The works of art lining the hallways of the hotel and in the rooms are genuine California images, miles above the standard (and sometimes laughable) prints often found in chain hotels.

But perhaps the room's most exciting feature is outside of it: the balcony, providing a great view of golfers playing the 18th hole of the famous Torrey Pines Golf Course, which hosted last year's U.S. Open tournament. Nearby, an expansive pool and lounge area sits below an outdoor deck with restaurant and casual seating.

Pelzer pointed out that while the renowned course is only one portion of the hotel's appeal, staying at the Lodge does entitle guests to guaranteed tee times, which are otherwise "almost impossible" to secure.

The three other prime factors that keep the Lodge's vacancy well occupied are, of course, its pristine location -- a stone's throw from dozens of scenic hiking trails and an idyllic beach setting at the State Reserve; the world-class spa; and the culinary delights of its signature restaurant known for its market-driven cuisine, A.R. Valentien -- named for an early 20th-century impressionist and a celebrated San Diego artist.

Pelzer emphasized the family-run Lodge's perpetual goal of upholding the time-honored image and feel of California "before 'Baywatch.'"

"David Hasselhoff did not discover California," he joked.

The executive acknowledges that as more and more news about hotels hit hard by the economy surfaces, "people are getting very educated about our industry," he said.

People want to know where they can book rooms in advance without worrying about who might own the hotel by the time they get there, he explained, and in the end, "Who will be the last man standing?"

Luckily for The Lodge at Torrey Pines, Evans Hotels may have the secret to success.

"Know who you are, do what you do, do it better than anybody else," Pelzer said. "And I think we do that."