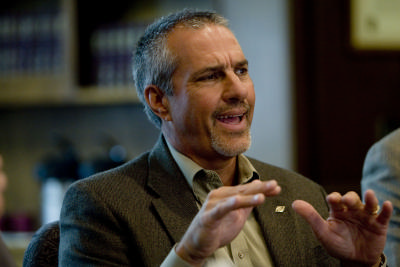 The mood in the local construction sector appears to be a mix of uncertainty and optimism, as expressed by industry leaders during a roundtable discussion hosted by The Daily Transcript.

"There is work out there, but it is few and far between," said Roel Construction Co. CEO Wayne Hickey. "And, when there is a job out there, you might have 20 to 30 contractors looking at it right now."

He added that currently there is "not enough" happening in the construction industry.

This is not the first recession that many of the construction executives present at the roundtable have experienced. But many agree that the current marketplace is different from what they have seen in the past.

Pacific Building Group President Jim Roherty said the slowdown in the mid-1990s was due to over-building and had nothing to do with the financial sector crashing or a lack of lending, as the current recession does.

Hickey added that, this time around, various private sectors dried up within three or four months, which was not the case during the mid-1990s slowdown.

"There was more opportunity (then) and certainly less competition," he said.

Currently, the major hot beds for construction are in the public sector, specifically in military and education work.

Because of the strong military presence in San Diego, contractors have a variety of opportunities. However, with base realignments and closures taking place, construction industry professionals are under more pressure to redevelop existing bases, said Eric Stenman, president of the local Barnhart Inc. office.

Stenman added that, unlike other sectors, the "federal government has the American Recovery and Reinvestment Act, (which is adding) additional funds" to help keep business steady.

He explained that the military sector of construction is doing pretty well because troops returning from overseas need housing and medical care.

However, participating in military projects comes with a variety of prerequisites, which make it challenging for contractors to get into that industry.

On the education front, school projects are becoming more popular thanks to bonds passed by voters in the last few years. Most school projects consist of modernizations and renovations of existing facilities.

Some contractors, however, see future opportunities as banks start lending again and people start spending. The hope is that new areas for growth will open up because numerous projects are already designed or shovel ready.

Smaller health care renovation projects, for example, have been put on hold because of various financial issues, Roherty said.

"We have had a lot of people indicate, if they had the money, they would build something," he added. However, Roherty was somewhat skeptical and said the contractors will wait and "see if that really happens."

Hickey said there are projects ready to be built in the hospitality sector too, but indicated that he is skeptical any construction would occur even if the money were available.

RQ Construction Inc. President and CEO George H. Rogers III said he believes projects will move forward as soon as banks start lending. He suspects the priority will be on projects such as those in the health care sector, rather than hospitality.

"Who wants to build a hotel with 60 percent occupancy rates?" Rogers asked. "What people forget is that construction comes from wealth ... and in this economy, wealth has disappeared."

Almost all participants at the roundtable, which was sponsored by Hawthorne CAT, agreed that it is hard to say what lies ahead. They agreed that, if they want to survive, they need to branch out and prepare for many different circumstances and projects in a variety of sectors.

Traditionally, general contractors specialize in one or two sectors. Barnhart, for example, focuses on institutional projects. Industry leaders now say the construction industry is changing and firms need to diversify to stay alive.

In the past, Roel's main contracts were from the private sector, but Hickey said the company is now venturing to the public side because projects like office buildings and hotels have dried up.

He added that Roel is "willing" to diversify "because we need that in our business. We need that portion of the business in the future." Roel's revenue is down 40 percent to 50 percent from two years ago.

Many general contracting firms now offer other services such as construction management and in-house architectural design to broaden their client base. Many firms also are using new tools and technology, like Building Information Modeling, as well as embracing "green" and sustainable design.

"We are forced to look at every aspect of our business right now and find ways to increase our productivity. When we come out of this (recession), we are going to be better companies," said John Keeker, district manager for Gilbane Building Co.