The construction project slated for the south side of Ash Street in the Cortez neighborhood of downtown takes the notion of "mixed-use" seriously.

"This is extremely diverse mixed-use," said Ried Floco, chief operating officer for San Diego-based real estate management company Narven Enterprises. "It pretty much covers all the components that you can put into downtown."

The 719 Ash Street project will replace a three-story Rodeway Inn at the site and is expected to begin construction sometime this year, with completion tentatively scheduled for mid-2011. 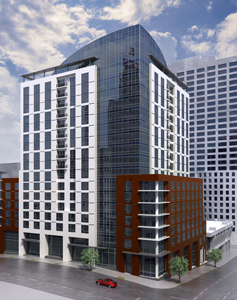 Though approved by Centre City Development Corp. in late January, the economic environment and slower hotel market delayed the start of construction on 719 Ash Street. Constructed is now expected to begin late this year.

"It's a great location; it's pretty much on top of downtown," said Joseph Wong, principal with San Diego architecture firm Joseph Wong Design Associates. "We hope that it will be a great addition to the neighborhood."

The Centre City Development Corp. approved the project in late January, according to the CCDC Web site, but the economic environment and the slower hotel market caused Floco and his firm to delay the start of construction.

"For us, it's the timing," Floco said in a phone interview. "We wanted to hold off until there's more visibility and clarity. More than anything, it was important to not rush into it."

Once completed, 719 Ash Street will house both the Hilton Garden Inn and Homewood Suites by Hilton, providing both traditional hotel services as well as space for extended stays.

The two hotels will have separate lobbies, floors and restaurants, but they will share meeting space and recreational space -- principally a sky terrace that will include a swimming pool, spa and exercise area, Wong said.

"It's a very interesting concept," he said of the mixed-use facility, adding that the floor plan is very "efficient."

The building has been designed to meet LEED (Leadership in Energy and Environmental Design) certification criteria, which requires certain efficiency and eco-friendly standards.

LEED ratings are based on a point system, resulting in four levels of certification: certified, silver, gold and platinum.

Those involved with the project are hoping that the Ash Street hotel will garner more than just a basic certification, Wong said.

The building's lighting, windows, exterior material, and heating and cooling systems are all energy efficient. The laundry systems and plumbing fixtures either recycle water or minimize water waste.

All paints and finishes to be used contain low amounts of volatile organic compounds, or VOCs, which emit toxic gases and vapors.

The green roof will be planted with vegetation, designed to trap and capture rainwater. The position of the building itself is also designed to minimize the heat island effect, in which a building absorbs great amounts of heat and creates a greater demand for air-conditioning.

The building also is designed to mesh with its downtown environment. The lobbies, restaurants and storefronts all face the street behind tall windows on the ground level.

"It's very transparent," Wong said. "How the exterior interacts with the ground level is one of the important aspects of a mixed-use project."

The building will likely incorporate some public art on the outside as well. An effort was also made to ensure the building was not "bulky" and complied with CCDC downtown design guidelines.

The building's most distinctive feature is its westward-facing curve, designed to suggest the image of a wave rolling into shore.

"That would be part of the skyline to the east," Wong said. "We feel that has a certain dynamic-ness. ... We want people to say, 'Look, what is that?' It's not a typical office building or a typical condominium."