In September, San Diego Mayor Jerry Sanders will ask the City Council to approve more funding for a contractor to take bids on the long-proposed downtown library.

Turner Construction, the "construction manager at risk" for the project, originally estimated the price tag for the new building would be $185 million.

That was four years ago and a lot has changed, including the onset of a severe economic downturn and San Diego's pension problems.

Still, officials in the mayor's office are hopeful that the downtown library can be erected. 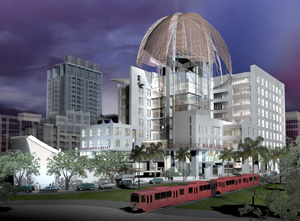 The clock is ticking on a new downtown library. The city must begin construction of the project by Aug. 1, 2010 or lose $20 million in state funding.

"We don't really know (the new cost). What we've decided is, this project has come so far, it'd be a real waste of time and money to do another estimate just to have an estimate. It doesn't cost that much more to just bid the thing out and see if it comes in low enough that the funds we have can actually build it."

Critics question the timing of spending millions to build a new library while the city cuts back on other services. But proponents feel the current facility is outdated and a new library could further downtown's renaissance.

"I know a lot of families aren't comfortable visiting the current library," said Todd Ruth, a member of the Center City Development Corp.'s education task force. "They'll go to Mission Valley or Point Loma, which is sad because it's such a great resource. The children's room is enormous."

Todd Bulich, an adjunct professor with California School of Law and president of his own real estate company, said it's a tough political climate for such a project.

"What is needed is to have leaders take a leap of faith and say why we need it and why it will help downtown," he said. "What we need is a morale boost. San Diego has gotten hit from all sides. We need civic leaders to feel good about it."

The city has several funding sources it can tap if it decides to go ahead with the project. The question is, will it be enough?

There's a $20 million grant from the state of California, made available when state voters passed the Library Bond Act in 2000.

The city is on notice, however, that if it doesn't achieve certain benchmarks by August 2010, the money could be reallocated to another city in California. The City Council will need to have approved the release of bids by Nov. 15, 2009, and begun construction of the project by Aug. 1, 2010.

The city also could receive an additional $20 million in Proposition S funding from the San Diego Unified School District, which wants to lease two floors of the building for a charter high school. The two sides have publicly supported a statement of intent and are working on a formal lease.

As one of the benchmarks for keeping state funding, the city must complete a lease agreement with the school district by May 1, 2010, along with a statement of the viability of the project and its budget.

California Western's Bulich said the possibility of housing a charter school has really revived the library project and makes it more enticing.

"For a long time, the barrier to living downtown is where do your kids go to school," Bulich said. "This is an opportunity. It can spur economic growth. There's so much excess inventory, it's a chance to soak that up. If you build up downtown, you get a more family atmosphere and (people) have reason to come downtown."

The San Diego Library Foundation, meanwhile, has raised $27.5 million in private donations for the project.

The biggest chunk of funding is $80 million of redevelopment money from CCDC, giving the city a potential of $147.5 million for the project. While the CCDC money can be used for projects other than the library, it can't be used outside the downtown area.

Turner Construction has agreed to provide a guaranteed maximum price (GMP). If it goes over the estimate, the company will absorb the loss.

"That works well in this situation because we have a very finite amount to play with," Rath said.

Rath said the city should get a GMP by next summer, allowing officials to make the decision on whether they can go ahead with the project.

Turner Construction is not tied to the original estimate of $185 million. It hopes to take all the plans and bid them out again this fall.

The downtown library is one of several downtown projects the city is trying to shepherd this year, including a new city hall and an expanded convention center.

"Each project stands on its own, and each project needs to be addressed in some manner," said Darren Pudgil, a spokesman for the mayor's office. "The mayor has set a very ambitious agenda. He wants to move these forward."