The University of California, San Diego's Sulpizio Family Cardiovascular Center will be the crown jewel of UCSD's Thornton Hospital complex.

The 128,000-square-foot building with a jewel box-inspired design will be the first hospital in the nation to seek LEED certification from the U.S. Green Building Council, said Randy Leopold, principal architect on the project.

"We wanted to build it a little differently, and we were lucky to work with a high-performing team committed to doing that," Leopold said.

Construction is currently underway on the facility, which comes with a total price tag of $227 million. Contractor DPM Construction plans to complete the facility in 2010. 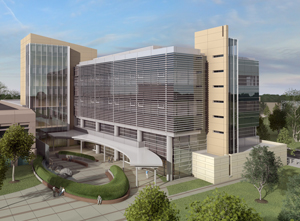 UCSD's Sulpizio Family Cardiovascular Center will cost $227 million and be completed in 2010.

The building will achieve its LEED certification through the incorporation of energy-efficient lighting including LED surgery lamps, low-flow water fixtures and irrigation, a white roof and the building's proximity to public transportation.

The facility's orientation on its site will also earn LEED points. The cardiovascular center is oriented to maximize natural light while providing shade to minimize the need for air-conditioning to cool the building.

It is very difficult for hospitals to achieve LEED certification because of the type of equipment they require, Leopold said. Hospitals are energy intensive buildings, between all of the surgery and other necessary medical equipment. Emergency departments are in use all the time and thus never enter a period of lower consumption, as most institutional buildings do at night.

The U.S. Green Building Council has separate standards in place for different categories of buildings; however, there is no guide designed specifically for hospital facilities.

The building was designed around a central courtyard with a healing garden. Architects meticulously designed the courtyard to contain rough elements such as stone and glass that become gradually more refined moving from outdoors into the hospital environment, Leopold said.

Once completed, Sulpizio Family Cardiovascular Center will be the region's only university-based fellowship training program in clinical cardiology and cardiovascular research. The program's goal is to develop cardiologists with advanced experience who are committed to becoming accomplished scholars and leaders. In 2007, more than 450 applicants competed for only four open positions.

The center is named for Richard and Maria "Gaby" Sulpizio, who donated $10 million to the cardiovascular center.