Some new projects downtown resemble more stylish, expensive apartments -- but their rents range from $237 to slightly more than $1,000 for those who qualify.

Organizations such as Centre City Development Corp., Father Joe's Villages and the San Diego Housing Commission are heavily involved with development, and in turn work with local architectural firms.

Projects such as the planned Cedar Gateway and 15th & Commercial will also benefit the mentally ill or recovering addicts.

With modern, open design and better management, the new dwellings are a change from "low-income" housing of the past, he added.

Wiblin said the new affordable housing projects are part of a positive trend.

"I think everybody views it as economic development," he said.

Paradoxically, "it's a really challenging time as well," she added. "More pressure is put on local communities to pay for (projects), and that may mean more will be put on hold."

Here is an overview of projects completed, under way or planned in downtown San Diego. 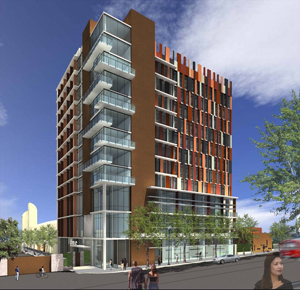 Father Joe's Villages hopes to start construction in November on the 64 studio apartments of 15th and Commercial.

If all goes well, the 32,765-square-foot building -- featuring 64 studio apartments -- will house tenants in two years.

Amenities will include a licensed childcare facility and outdoor play space. It will also feature transitional housing for single adults.

It "really started as a result of us getting $6.9 million from the (state) First 5 commission," said Mathew Packard, vice president of development for Father Joe's. "Once we received that award, we thought about how to best use that money."

Because state money generally comes after construction is finished, there was some concerned whether the state would honor its current commitments, in light of the current state budget crisis.

"We are hopeful, also, that the state will be able to pass a budget and honor its funding commitments of $7 million," Packard added.

In the meantime, Packard said Father Joe's is working with lenders so the project can become a reality. 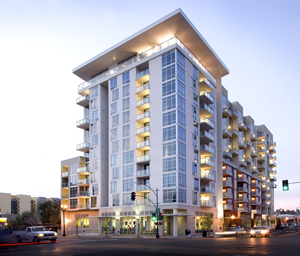 Occupancy at 16th and Market is restricted to residents earning between 30 percent to 65 percent of the area median income, while seven units are reserved for adults living with HIV, mental illness or considered at risk becoming homeless.

"We're getting very positive feedback from tenants," he added.

Living space for each apartment ranges from 553 to 1,300 square feet. Occupancy is restricted to residents earning between 30 percent to 65 percent of the area median income. Seven units are reserved for adults living with HIV, mental illness or considered at risk becoming homeless.

Ten million dollars in multi-family housing funds from the state of California were to be used, but there is concern whether the state can sell the bonds.

"The current budget crisis makes us nervous," Packard said. "Until they pass a budget and send us a check, we've got our fingers crossed." 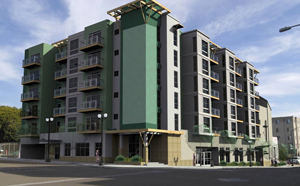 Currently under construction in the East Village, Parkside in LEED Silver certified and scheduled to open in 2010.

Currently under construction at 515 13th St. in the East Village, the seven-story Parkside will feature two large outside play areas, 13,000 square feet of groundfloor retail space and low-flow water fixtures.

He added the $89 million project is LEED Silver certified and scheduled to open in 2010. Of 229 units, 226 are affordable and 65 geared for families.

"It was already approved to be a market-rate condo development, and that saved the developer a lot of costs going though the process," Graham added.

Graham said current financial woes have not affected Parkside's progress, as all funding was in place.

CCDC is now compiling an "interest list" of those wanting to live there, Graham said.

At least 23 units will house those with mental health issues or those recovering from drug dependency.

Because of issues with several public funding assistance programs, construction has been delayed until this October.

"It was an important part of the process, educating the community," the CCDC's Graham said, adding there will be on-site security.

It will feature 250 units, with 88 of them reserved for special needs residents, he said.

Studio E Architects is handling the design, with MVE as principal architect.

The plan is to build Ninth & Broadway with a large outdoor garden, barbecue areas and a photovoltaic component wrapping the building's southern side as part of its Silver LEED rating.

Wiblin said the total cost is slightly over $65 million. CCDC has approved the project, but it will head to the San Diego City Redevelopment Agency board for a final OK.

CCDC will loan $21 million to get the ball rolling, but Bridge must first line up financing from other sources, Wiblin said.

However, at this point, it is only a concept because there is no money to start construction.

"It would be really big, and we would only be funding the second phase," Kameyama said. "We're having problems with the lenders, which have more stringent criteria, so more local funding is required, (but) we're pushing for it to happen."