The San Diego Community College District is taking full advantage of funding granted by voters in recent years, building state-of-the-art facilities all over its campuses.

The projects include a multipurpose building where 50-year-old "temporary" classrooms once stood, and an athletic center where both the school's sports teams and the community can play. The projects were largely designed with their surrounding communities involved, and are also striving for LEED certification, meaning they are environmentally friendly.

"We think we're the best bargain in town," said Ursual Kroemer, communications director for the projects. "You get a quality education and these are state-of-the-art facilities."

The revamping of the Community College District is a result of the voter-approved Propositions S and N in 2002 and 2006. The propositions granted a total of $1.55 billion in funding to construct new facilities. 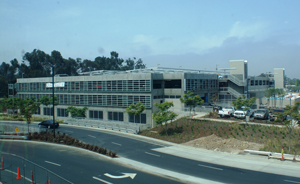 The biggest projects include new or improved buildings at the City, Mesa and Miramar campuses, as well as the Continuing Education programs in Point Loma and on Ocean View Boulevard.

"City College is, I would say, maybe the most dramatically transformed," said Kroemer.

The general-purpose classroom building is near public transportation, and has been designed by Roesling Nakamura Terada Architects with particular attention to the existing neighborhood.

City College is also getting a remodel of its Academic Success Center and the P-Building at the Harry West Gymnasium. 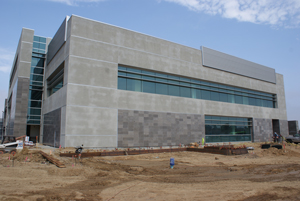 The Mesa College campus' Allied Health building is scheduled for completion in November. That building will house the school's radiological technology and dental and medical assisting programs. The program will transform the east campus gateway for the Mesa Campus, making it easier to find the buildings. There is also a new 1,100 spot-parking center.

There is also a new police substation for the college's police department, and an all weather track and field facility.

The largest of the San Diego Community College District campuses, Miramar for years consisted largely of two main buildings, and later "non-permanent" classrooms that remained on site for years.

The highlight of the work being done at the Miramar campus is the Hourglass Park Field House. Finished last spring, the mixed-use building includes classrooms, lecture halls and office space, as well as athletic facilities that Kroemer said are on par with any four-year university.

"It serves as a home to our student athletes there, but (it's) also a great home for residents of the Mira Mesa area," she said. "Even as we were doing construction, you'd see little kids and their parents from Mira Mesa wandering over to take swimming lessons."

In addition to the Field House and infrastructure work, Miramar has new classrooms for arts and humanities, business technology and mathematics, an expansion of the automotive technology training center, an aviation technology renovation and a new student union that's still in the design phase.

At the West City campus in Point Loma, the school replaced a collection of classrooms that were built in the 1950s and never intended to be permanent. The campus has been deemed a "campus of excellence" for the district's hospitality and culinary arts programs, and has a new multipurpose building for classrooms.

Built with recycled products, designed to be naturally climate controlled and using bathroom fixtures that use low amounts of water, the building is efficient to run, saving the district -- and therefore taxpayers -- money.

"Far and wide we find that pursuing that LEED certification not only gives us a smarter building, a greener building, more efficient, but overall the cost is less too," Kroemer said.

Yet another massive project is the Skills Center at the Educational Cultural Complex, or ECC. This is the district's largest campus for continuing education in San Diego. Located on Ocean View Boulevard, the ECC houses the majority of the continuing education staff, including the president.

The building also houses automotive technology training, upholstery, business technology and other education programs. The district is aiming for a LEED rating of at least silver on its projects, but the ECC Skills Center is likely to receive a LEED Gold rating, thanks to photovoltaic solar power panels.

Most of the buildings have been completed close to their timelines, and cost overruns have been within acceptable estimates, Kroemer said. A few have even come in under budget.

Kroemer attributed much of this to the District using a construction manager multiple prime method, which allows the school to choose subcontractors. A great deal of infrastructure work was required in addition to the new buildings, from sewers to seismic retrofits, and Kroemer said choosing its own subcontractors helped the district save money and use more local, diverse workers.

The down economy has been beneficial for the district, as it has been able to take advantage of lower commodities costs and bids. While the state's financial problems will have an effect on the district's ability to fill these new classrooms and offer more educational programs, Sacramento's troubles won't stop construction.

"This is an opportune time for our taxpayers funding this bond, to utilize this kind of trend in the economy where a lot of the (subcontractors) are bidding projects for less than they might just because they want to keep their businesses going," Kroemer said.