Downtown's latest boutique hotel has enjoyed better-than-expected bookings since it opened July 13, nearly one month ahead of schedule.

The hotel is the newest addition to the chain of trendy boutique hotels owned by InterContinental Hotels Group (NYSE: IHG), which operates several major chains including Holiday Inn, Crowne Plaza and StayBridge; and the first owned by the conglomerate to achieve LEED certification, the industry standard for recognition of sustainable buildings administered by the U.S. Green Building Council.

The hotel is just the 17th in the nation to achieve LEED certification, and the ninth in the state, Arends said. 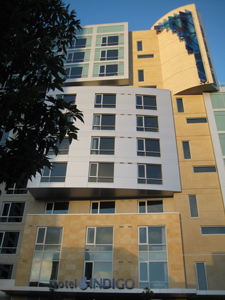 "As a global company, Intercontinental Hotels is always looking for ways to be an example of corporate responsibility," said IHG spokeswoman Caroline Counihan. "Utilizing green technologies in a responsible way is an important part of that goal."

Green building materials incorporated in the hotel include recycled hard wood floors, ceiling materials without volatile organic compounds, and a cooling system that utilizes zero CFC-emitting refrigerants. In order to optimize energy efficiency, the design allows for ample natural lighting during the day and the application of a glaze will provide additional insulation, Torchiana said.

The building's living roof aids in cooling and helps filter pollutants from runoff before it enters the city's storm drains, Torchiana said. The roof has been sown with California-native plants to reduce water usage. Guests will be able to view the roof from the ninth-floor terrace.

The hotel has been in the planning phases since 2006, Counihan said. Because LEED certification is such an important goal, expert Drew George served as the hotel's LEED project manager. Hensel Phelps Construction Co. is the general contractor on the project.

Hotel Indigo chose the location at the corner of Ninth and Island Avenues in part because of the goal to gain LEED certification for the project, Counihan said. The hotel earned many of its points toward certification by demolishing several one-story buildings on the site and recycling the materials. The hotel also earned points for its location on bus routes, giving guests easy access to mass transit, Counihan said.

The location is ideal for attracting both business and leisure travelers. Located in the Gaslamp District, guests can walk to a multitude of restaurants as well as Petco Park. The hotel is also less than a mile from the San Diego Convention Center.

Aside from encouraging use of public transportation, Hotel Indigo offers incentives to guests who reduce their carbon footprints by driving fuel-efficient cars. Guests driving fuel-efficient vehicles are charged a reduced rate for parking, and the hotel provides designated parking spaces for flex cars, which serve as a green alternative to car rental, Torchiana said.

Each guestroom is decorated with plush comforters, hardwood floors with area rugs and spa-inspired showers.

The building also includes a rooftop terrace, casual dining restaurant, Gold Bean and the chic Phi Bar. Though the spelling differs, the bar is named after Fibonacci numbers, the formula for divine proportion in nature. The hotel is decorated with trees, shells and a variety of natural icons, furthering Hotel Indigo's theme: "It's about balance with nature," Counihan said.