When officials from the city of San Diego and developer Gerding Edlen meet again to talk about a new civic center complex, they'll have a lot to discuss.

Since the Portland, Ore.-based company first proposed its ambitious three-phase, half-billion-dollar project, the economy has fallen into a lingering recession.

Next month, the San Diego City Council is expected to vote on whether the city should enter into an exclusive negotiation agreement (ENA) with Gerding Edlen. 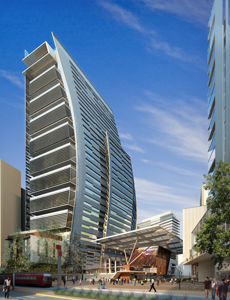 The Center City Development Corp. recently recommended the city sign an ENA with Gerding, noting that the current City Hall is in disrepair and is too small to fit the city's needs.

"We have a building and a complex that's falling apart," Rath said. "We know what's wrong with it, and we know how much it costs to replace that.

"We have leases for space throughout downtown. We know how much it costs us, so we know exactly where we're headed, and the line is headed up."

City officials estimate it will cost $40 million over 10 years to renovate the current City Hall and adjacent building. The price tag doesn't include the amount it would cost the city to continue to lease space offsite.

The city's current leases, obtained at relatively bargain prices in the 1990s, are set to expire soon, and Rath said new rates could be very expensive.

How much more the city's rents will increase is a matter for debate, "but we're convinced it's going be substantial," he said. "There's nothing we can do about that because we need more space than we own."

Approximately 2,000 of the city's 3,000 downtown employees have to use private office space.

Mayor Jerry Sanders has stated publicly that a new city hall will have to make sense economically or he will not support it.

"The mayor's commitment on that project has been, if it's cheaper, we'll do it; if it's more expensive, we won't," Rath said. "It's just that simple. We're not excited about picking drapes and new tile floors. We care about spending the people's money on services instead of real estate. So it's a simple business decision for us."

Building a new civic center complex would save the city an estimated $34.5 million over five years and $74.7 million over 15 years, according to a cost analysis by real estate advisory firm Jones Lang LaSalle.

Gerding Edlen is approaching the project from three phases, with the first part being a 34-floor, sail-shaped city hall building with 980,000 gross square feet. It would house a new fire station, civic theater, residential space and 20,000 square feet of retail space on the first floor.

The building's efficient floor plan design will allow the city to save money by consolidating 1 million square feet of office space it currently occupies throughout downtown to 670,000 square feet, according to Gerding Edlen vice president Brent Gaulke.

The sail-shape design would give San Diego an iconic landmark in its skyline, but the building is environmentally friendly as well.

"What this is about is saving the city money," Gaulke said. "It can be a model of architectural excellence, but it also has to be energy efficient."

Gerding Edlen's proposal would enable city hall to achieve the highest standard in sustainability -- LEED platinum. The building will feature solar panels, rooftop gardens and an onsite wastewater treatment and reclamation system, allowing it to be a "net zero" water user.

"It's important now, but if you're a believer that water scarcity will put pressure on prices on water and electricity, it's a smart bet to put the upfront costs in because they will pay back themselves in a reasonable time," Gaulke said.

Since then, however, real estate values have dropped and new construction has slowed.

But the decrease in projects has led to a reduction in the price for certain construction materials, and the economy has led to new financing options.

The federal government is offering "Build America" bonds, which are taxable bonds subsidized by the government. The program is set to expire in 2010.

"We can hit or beat our numbers if we're able to start construction in the near term," Gaulke said.

Gerding Edlen would like to develop the other two blocks in the complex, but is focusing on the first phase now.

The whole project could eventually be put on the ballot. A section in the city charter stipulates that any large project that has any private benefit must be put before the voters.

Rath said Gerding's initial proposal would fit that criteria, but even if it didn't, Sanders already has said he would let the voters weigh in on the project.

"The people should have a right to vote on whether or not there's a new city hall," Rath said of the mayor's view.

City councilman Kevin Faulconer, whose district includes the city hall property, wants to make sure the project is economically feasible.

"For the most part, he doesn't have a problem with continuing to talk, but he has some certain things he'd like to see in the ENA," said Tony Manolatos, Faulconer's spokesman. "He wants to make sure it's a good deal for the city and the taxpayer."