If you have parked in the structure next to the San Diego Convention Center and new Hilton hotel to either go see a game at Petco Park or to visit the Gaslamp Quarter in the last few years, chances are you may have been late.

When Petco Park was built, the intersection to get on Park Boulevard -- formally 12th Avenue -- from Harbor Drive was closed. If you wanted to get across Harbor, you had to walk all the way around to Fifth Avenue.

But all this will change soon, as construction is well under way on the new Harbor Drive Pedestrian Bridge.

The project entails building a 500-foot-long bridge that will be 25 feet high and will go from the 2,000-space parking structure on Harbor Drive to the main entrance in front of Petco Park.

It is designed with a curved span like an "S" and has a 130-foot, 45-degree angled center pylon to reinforce the bridge and to add a unique element. The bridge is made out of 16-foot wide and 3-foot thick concrete, and stainless steel with wrapped suspension cable railing. 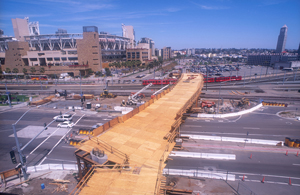 The Harbor Drive Pedestrian Bridge will connect the 2,000-space parking structure on Harbor Drive to the main entrance of Petco Park.

The project also involves installing enhanced lighting above and below the bridge's deck and along the center pylon to create a glowing curtain of light across Harbor Drive.

Conventional metal halide lights, located at the base of the cables, will illuminate the cables above. The design also incorporates LED under-tread lighting for the stairs.

The project involves planting landscape on the two ends of the bridge, and there will be public art on display by Mathieu Gregoire.

The Harbor Drive bridge is the final piece in the Park-to-Bay link project, and is being built to fulfilling a California Public Utilities Commission requirement that calls for a pedestrian bridge.

According to the Centre City Development Corp., the project is designed to be one of the longest self-anchored pedestrian suspension bridges in the world.

CCDC also says it plans for an at-grade crossing that will include pedestrian barriers and enhanced safety crossing technologies, thus improving traffic circulation and access to and from the waterfront and Barrio Logan.

The project is funded through federal, state and local agencies including Caltrans and the Centre City Development Corp., along with private contributions.

The Harbor Drive Pedestrian Bridge broke ground in October 2008, and the project is slated to be completed later this winter.

The project officially got started in June 2006, when the environmental report was completed. In July 2007, a land acquisition was complete, and in June 2008 Reyes Construction Inc. was named the general contractor.

The city of San Diego is also involved on this project as an engineer.