The state of California's budget woes are already having an adverse effect on public universities and colleges, but the alumni of San Diego State University are stepping in to help improve the home of the Aztecs.

Built mostly by donations, a new Alumni Association building is under construction at SDSU, and is scheduled for completion in October. The Parma Payne Goodall Alumni Center is the first time in the school's history that the Alumni Association has had its own building.

"(It) will mean a lot for the university's alumni to have a place they can call home," said Gina Jacobs, media relations manager for SDSU.

The two story, 30,000-square-foot center will be located across the street from the Viejas Arena (formerly known as the Cox Arena) and next to the Athletics Center.

It's scheduled to include a multipurpose outdoor pavilion area overlooking the athletic fields and Tony Gwynn Stadium, a Great Hall Ballroom for entertaining up to 260 people, a lounge and library with Aztecs memorabilia, a boardroom and 20,000 square feet of meeting and gathering space.

Finishing work is being completed both inside and out at the new Parma Payne Goodall Alumni Center construction site at 55th Street and Hardy Avenue.

"On the inside, practically the entire building is painted out," construction manager Steve Nelson of Midwest General Inc. said on the school's Web site. "A substantial amount of the ceiling grid is in and the tiling in the restrooms is about half done."

Roofing tiles recovered from the building that formerly housed the SDSU Alumni Association await installation of custom gutters before they may be placed. Second-floor terraces are receiving "traffic topping," which requires several applications and helps with weatherproofing.

A grand opening for the Center is planned for homecoming weekend, Oct. 17. 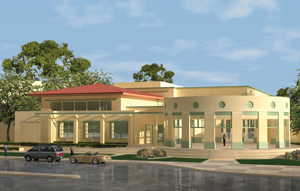