Among the newest additions to San Diego's skyline is Ten Fifty B, a 23-story affordable housing project owned by Affirmed Housing Group.

Located in downtown San Diego's East Village neighborhood, the building will be the tallest affordable housing project on the West Coast.

Once Ten Fifty B is completed in May 2010, the 19,994-square-foot skyscraper will be home to 229 families and individuals earning between 30 percent and 60 percent of the area median income.

The site was originally owned by KB Homes (NYSE: KBH), which planned to build a luxury condominium complex. However, the developer abandoned the project in the planning phases after the economy soured. Affirmed Housing Group stepped in with plans to build an $89 million affordable housing complex with a $34 million grant from Centre City Development Corp., downtown San Diego's redevelopment agency. 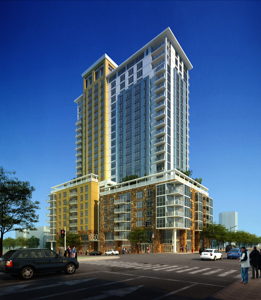 Once Ten Fifty B is completed in May 2010, the 19,994-square-foot skyscraper will be home to 229 families and individuals earning between 30 percent and 60 percent of the area median income.

Rather than move through the permitting process for a new development, Affirmed Housing opted to build within the building envelope KB Homes had already received the necessary approvals for. Architecture firm Martinez & Cutri Corp. helped adapt the luxury high-rise to a comfortable yet cost-efficient affordable housing project.

The building includes ground-floor retail space and three levels of underground parking containing 124 spaces. Ten Fifty B will have a modern façade. Though it will occupy an entire city block, the building is broken up into sections covered in stone, glass, stucco and bright splashes of yellow and blue color.

The interior of the building was designed to provide residents a good quality of life with plenty of common space and high-quality building materials, said architect David Priest of Martinez & Cutri. Architects envisioned the building to provide an environment very different from the affordable residences built in the 1960s and referred to as "the projects," Priest said.

"It was difficult for people to have a high quality of life due to small living spaces and the materials that were used," Priest said of such projects.

The building is targeting LEED Silver certification from the U.S. Green Building Council. Green building materials include high-performance glass, which helps reduce the need for heating and cooling, recycled building materials, high-efficiency lighting, and designated parking spaces for high-mileage vehicles and racks to hold 85 bicycles. The building also includes a solar hot water system and will generate 2.5 percent of the power it needs with a photovoltaic solar array on the roof.

Turner Construction is the general contractor on the project.

Ten Fifty B has already generated interest from more people than will be able call the building home once it is completed. Though Affirmed Housing has not yet begun accepting rental applications for the project, nearly 2,000 people have entered their name on the interest list, said Yvonne DeCarlo of Affirmed Housing Group.