A new cruise ship terminal to help service the nearly 1 million yearly passengers who visit San Diego is under construction at the Port of San Diego. The two-story terminal, to be built on Broadway Pier on San Diego Bay, will be 52,000 square feet and have room to accommodate up to 2,600 passengers.

Designed by Bermello Ajamil & Partners, a multidisciplinary, award-winning design and project management firm headquartered in Miami, the terminal is being designed as a Leadership in Energy & Environmental Design certified building, meaning it will be designed to use less water, less energy and produce fewer pollutants.

Jaynes Corp., a construction company with offices throughout the Southwest, is the contractor on the project, which is scheduled to be open for business in December 2010. The construction contract also includes a mobile passenger gangway and seismic improvements to the pier. The estimated construction cost is $21.1 million. 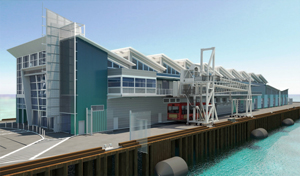 In addition to cruise terminal operations, the terminal will house offices for the U.S. Customs & Border Protection. There will be space that can be used for public and special events on days when cruise ships aren't in port. A public space will be open in the back of the building, with an open pavilion area that will provide views of the bay. On the second floor, another area will be available for public events.

Construction elements that will help the project qualify for LEED certification include a photovoltaic system that will provide at least 12 percent of the building's energy. Highly reflective roof paint, low-flow toilets, urinals and faucets will also help keep water and energy costs down. Low-emitting materials such as low-voc paints (paints that contain minimal amounts of volatile organic compounds), as well as low-voc carpets and sealants will also be incorporated.

Not only will the new cruise ship terminal help the environment by using sustainable and energy-conserving materials, it will include another component to help reduce air pollution.

Equipment will be installed at the new terminal, as well as the Port's main cruise ship terminal on B Street, to allow cruise ships to plug into shore power while berthed. By doing so, it eliminates the need for vessels to keep their diesel engines running to provide power. According to the Environmental Health Coalition, installation of the shore power system for cruise ships has the potential to reduce 300 tons of nitrogen oxides per year. Nitrogen oxides are harmful emissions that come from ships, cars, trucks and power plants.

The estimated cost for providing shore power to the new Broadway Pier cruise ship terminal and the B Street Cruise Ship Terminal is $7 million. The Port contracted with Cochran Inc., a Washington firm that installed a similar project in Seattle. Cochran will provide and install the equipment, which includes a main circuit breaker, control battery, protection relays, transition section to transformer and an equipment enclosure. It also includes a transformer with 20-megawatt capacity, dual voltage output and cooling equipment. Additional electrical equipment includes a capacitor circuit breaker, dual voltage breakers, and rated disconnects for each ship connection. Installing the equipment will include trench work, conduit runs, pier work and fencing.

The Port is working with San Diego Gas & Electric to provide the needed 12 megawatts of power at the cruise ship terminals.

Last year, 297 cruise ships called on the Port of San Diego. Each of these cruise ships has an economic impact of up to $2 million on the region's economy. That number is calculated from passenger spending and the businesses that serve the cruise lines. These include florists, food suppliers, linen companies, cleaning companies and bus and transportation services.

The Port has been working on ways to improve its cruise ship terminal for several years. The new terminal will allow the Port to continue with its successful cruise operations and allow the region to continue to benefit economically.

Elicone is a spokeswoman for the Port of San Diego.