By PADMA NAGAPPAN, Special to the Daily Transcript
Thursday, August 27, 2009

Growing up in a military family whose home base was Camp Pendleton, Tee Ness, the president and chief executive officer of Hawthorne CAT, considers himself a native San Diegan.

Hawthorne CAT has been a Caterpillar (NYSE: CAT) dealer for San Diego County and Northwestern Baja since 1956. Founded by J.B. Hawthorne and his son Tom in 1948 during the boom following World War II, the company originally was located in Los Angeles and known as L.A. Tractor and Equipment. When awarded the San Diego Caterpillar dealership, the company became Hawthorne Machinery Co. The company now has 525 employees and expects revenues of $220 million to $250 million this year.

Tom Hawthorne grew the company steadily and expanded the dealership's geographic territory to Hawaii and the Northern Mariana Islands before handing the reins over to Ness, who is also his son-in-law. 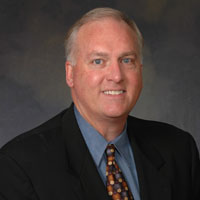 "I got into this business the easy way. I married the boss' daughter and joined the company straight out of college," said Ness, who met Debbie Hawthorne in high school. The couple also went to college together at Graceland University in Iowa, where Ness got a business degree with an emphasis in accounting.

He started as an accountant and "saw the light" five years into his career at Hawthorne CAT, when he realized that the operations side was a lot more fun than accounting.

Ness transitioned to the engineering department, starting out in product support, then moved to sales before running Hawthorne Power Systems, a group company formed in 1972 that sells, rents and services engines and power systems. It builds and rebuilds engines of all sizes, from truck engines to cogeneration plants and standby power.

"It was a good opportunity to learn the business, by working my way up. Starting out in accounting made it easy to understand it better," said Ness, who moved from running the power division to becoming the vice president of the group, then the executive vice president and in 1994, the CEO.

Ness said providing consistent leadership and continuity are his main contributions to the company -- important factors since most Caterpillar dealerships in the United States are family owned. He credits Hawthorne, who stepped aside completely three years ago, as having been a pioneer entrepreneur who grew the business to its current level.

"He lent a spark to the business. Today, it's a challenge to grow the business in this economy," he said, referring to the challenges and complexities of multiple geographic territories and different cultures in each area.

Expanding the territory to Hawaii

Until five years ago, Hawthorne CAT's operations were limited to San Diego, Tijuana and Ensenada. Then the opportunity to acquire the dealership in Hawaii and Guam came up and Hawthorne, then 75, took the risk of expanding, which meant taking on a lot of debt.

While Hawaii was a developed territory, it had not been fully leveraged, and the company focused on developing it to its full potential. The way the islands are spread out necessitated having branches in each of the islands where the firm does business, since it would be impractical to move heavy equipment from one island to another as needed.

In terms of local business, Ness estimated the company's market share is about 40 percent to 50 percent of machinery sales in San Diego.

"We are on top of every project that our contractor clients are involved in, not just tractors but also engines. We provide quotes for rentals and equipment to them when they place bids," he said.

The recession and slowdown in construction have had a dramatic impact on Hawthorne CAT's business, Ness said, explaining that he has witnessed other downturns but that this one has been far more severe. Equipment sales have dropped by 80 percent during the last two years, but things have balanced out because the power systems business has remained strong.

Thanks to military projects in Hawaii, last year was one of the strongest years for the power systems division. However, that work has also begun to slow down, he said.

Pieces of the pie

Machinery and engine sales comprise 40 percent to 45 percent of the whole pie for Hawthorne, followed by sales of parts and service that amount to 30 percent to 40 percent of revenues. Rentals, which have seen similar declines to machinery sales, make up the balance.

"I think we've been fortunate to hold our market share, thanks to Hawaii, which has been stronger than the local markets," Ness said.

Hawthorne has had several layoffs since the recession began, starting with a major downsizing in May 2007, followed by smaller ones last year and this year. The company has gone from about 850 employees to 525, with about half of them working in its San Diego offices. The company has closed three out of six rental offices in the county.

"I don't think anyone here anticipates a major uptick anytime soon. We've positioned everyone here to expect a slow rest of the year and even a slow 2010," Ness said.

Military projects have been one of the few bright spots in the county, and Hawthorne CAT has repositioned some of its staff to cover military contractors. It has also gone after more federal business.

Ness said housing has driven most of the company's local business for the last 50 years. It moved a lot of dirt when communities such as Tierra Santa, Santa Luz, 4S Ranch and the Otay Lakes housing developments were being built. Since the county is mostly built out now, Hawthorne CAT is focusing on roadways and infrastructure projects such as sewer, water, electric lines, demolition and urban redevelopment.

As one of the largest owners and suppliers of equipment locally, Hawthorne CAT has been trying to keep up with the new diesel regulations from the California Air Resources Board (CARB). Due to concerns from the struggling construction industry about jobs and the economy, CARB recently voted to postpone enforcement of the regulations for off-road diesel vehicles.

"We've moved out older equipment and we are now at a point where everything meets regulations. As a supplier, we anticipate regulations and try to keep on top of it. So far we haven't seen sales increase (because of the need for compliance), but it will happen some time in the future," Ness said.