By PADMA NAGAPPAN, Special to the Daily Transcript
Thursday, October 29, 2009

When scientists, entrepreneurs and others involved in the biofuels industry converged in San Diego during the second week of October for the third annual Algae Biomass Summit, they struck a decidedly different note compared with the first two years of the summit.

The emphasis was on cautious optimism about the potential for algae as a biofuel and careful avoidance of brash claims about the speed to market.

San Diego's significance as a hub in the nascent algae industry came to the forefront, with presentations from leading algae scientists at UCSD, Scripps Research Institute and the Scripps Institution of Oceanography.

Executives from local companies such as Sapphire Energy, Kent Bioenergy and Synthetic Genomics (which this summer landed a deal worth up to $300 million with ExxonMobil) also spoke during various sessions. Representatives from the U.S. Department of Agriculture, Department of Energy, National Renewable Energy Laboratory and other government agencies also shed light on the various funding programs and assistance available.

Not just fuel, but also food and feed

Despite the excitement surrounding algae as a potential replacement for fossil fuels and the investments pouring into companies in the field; participants made it clear that they were five to 12 years away from achieving price parity and large-scale commercialization, positioning their industry as an emerging, growing, but relatively young field.

Going after lower hanging fruit -- such as using the protein from algae for nutraceuticals or food supplements for humans and feed for animals -- was part of everyone's plan. These more profitable areas of development could provide revenue in the short term. 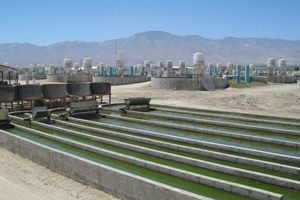 In addition to its research laboratory in San Diego, Kent Bioenergy runs this 160-acre open pond algae production facility near the Salton Sea.

"If we can make products to bring in revenue in the short term, this will help us survive in the long term. It's similar to the soybean industry, where the lowest source of income for soybean farmers was to sell it for fuel, but they made more from cooking oil, etc.," said Barry Toyonaga, chief business officer at Kent Bioenergy, which has received $20 million from private investors and $20 million in grants from the EPA, DOE and USDA.

Scientists encouraged the algae community to look at the pond scum in the same way that South East Asian communities use the coconut tree -- in its entirety, extracting oil for cooking, coconut juice, milk and meat, making coir products from the husk and thatched roofs and baskets from the leaves.

"This is a truly promising area of biotech that I've seen emerge in the last 10 years," said Joe Panetta, president and CEO of Biocom. "In the Southern California region, we have about 800 biotech companies, most of them related to health care, but we are seeing an emerging green biotech sector."

Algae draw on sunlight and carbon dioxide to grow and they accumulate fats and oils with molecules similar in structure to that of crude oil.

Algae advocates tout the biofuel as an ideal green alternative to crude oil, since aside from being non-polluting, it can also contribute to reducing global warming because carbon dioxide emissions can be captured for algae production. Another plus for algae is that the biofuel can be processed at existing refineries and transported on the same pipelines as petroleum -- unlike ethanol, which has to be trucked over by road.

Researchers and entrepreneurs from across the United States and around the world showcasing the advances they have made in the field spoke about the need to identify the best strains of algae, with several varieties necessary for different seasons and climates.

Large-scale algal production is limited by the availability of resources, chief among them the need to identify suitable non-arable land with the right climate and slope. Often such parcels of land do not have carbon dioxide in suitable supply.

The growing season is limited to the warmer months, since that is when the temperature is ideal for algal growth. 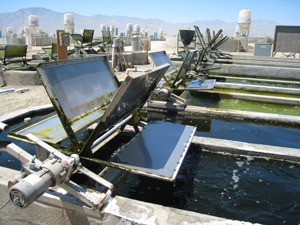 Kent Bioenergy got into the biofuels business after 20 years of aquaculture.

"Sapphire views these challenges as an agricultural problem -- the yield per acre, availability of water and land and cost issues," said Jason Pyle, CEO of Sapphire Energy. The well-funded algae company has financial backing of more than $100 million from Bill Gates' Cascade Investments and other venture capitalists.

Pyle also emphasized the importance of the engineering behind the production and extraction process. "We spent a lot of time putting together a good engineering team."

Dwelling on these same challenges, Kent Bioenergy's Toyonaga struck a cautious note, stressing the importance of survival in the long-term.

"Venture opportunities survive because they establish valuable relationships. We got here after 20 years of aquaculture," Toyonaga said, referring to Kent's background.

The company was the largest producer of hybrid striped bass fish when it went by the moniker Kent SeaTech, before it cited lack of economics as the reason for switching its focus to algae, which it had already been experimenting with since the '70s. It has 160 acres in algae production near the Salton Sea and follows the open pond cultivation method.

"We know how to harvest algae better than anybody, because this is something no one has mastered yet. So right now our focus is on extracting oil from it," Toyonaga said.

During a panel session, captains of the industry emphasized that the collaborations they had formed with the research community was key to their advancement in algae production.

These tie-ups were not just with algae scientists at universities and research institutes, but also with end-user companies such as Boeing (NYSE: BA), which is interested in algae as jet fuel, and petroleum companies such as Shell, Valero (NYSE: VLO) and Exxon Mobil Corp.(NYSE: XOM) and others.

Sapphire has several algae scientists from UCSD on its board of advisers and among its founders, including Stephen Mayfield and Stephen Briggs.

Kent works closely with David Brune, an agricultural scientist now with the University of Missouri, Columbia and John Benemann, who was with NREL before becoming an independent consultant and is regarded by many as an early pioneer in algae research.

Greg Mitchell, a scientist at the Scripps Institution of Oceanography who studies algae in relation to its environment, has worked with General Atomics as a consultant on DARPA (Defense Advanced Research Projects Agency) projects.

The city has tried to pull together the business and research communities, while stakeholders have recently formed an algae biofuel consortium, and CleanTECH San Diego has actively positioned the region as a hub. Still, there are rival claims from other regions.

The University of Texas, Austin, for instance has more than 3,000 algae strains in its labs and has a dedicated team of researchers pursuing algae for all its potential. So does the Bigelow Laboratory for Ocean Sciences in Maine.

"There is no doubt that they have serious research going on there as well," Mitchell said. "I got my undergraduate degree from UTA. But there are sound reasons why Exxon chose Synthetic Genomics and San Diego. We've got excellent research institutes here, UCSD has made advances and they are becoming dominant elements in algae research. So there is a growing community and a momentum in San Diego."

While he places San Diego ahead of the other locations in terms of advances, he said that was no reason for the local community to become complacent.

Mitchell has worked behind the scenes for five years to put together proposals for funding and to coordinate with Mayfield and others across the industry to create the consortium, which came about only last year.

"No solution can work unless it creates wealth in the economy. Algae are 10 to 50 times more efficient compared to any other biomass to feed the pigs, chickens and cows. But we are a long way from getting there, although the potential is huge. Algae-based food is going to be much bigger than fuel," Mitchell said.