For Gail Naughton, one of the most exciting things about her company Histogen's recent clinical trial is just how fast they're seeing results.

The trial, conducted in South America, is for a hair re-growth treatment. Looking at pictures of patient samples, the before and after differences are easy to see.

"You don't have to be a hair expert to see there are hairs where there were not (before) and they're thicker hairs," Naughton said, looking at photos of patients who received Histogen's hair re-growth treatment in South America. "One injection, we were able to increase it by 100 new hairs."

Hair regrowth is just one of the possible treatments Histogen hopes to generate with its stem cell technology. The company also has the potential to grow new organ cells, nerve cells in the spine, even treat cancer. But Naughton said hair treatments would have a huge initial market, which can bring in funding for other more serious conditions.

"Hair can really generate a lot of excitement and help us raise the cash we need to develop the other products," she said.

Histogen's chairwoman and chief executive, Naughton is somewhat of a rarity in that she is both a scientist and a businesswoman. She is working to make this less of a rarity in her other job -- as dean of San Diego State University's College of Business Administration. There, she has helped develop a joint Ph.D. and MBA program that will teach more scientists business skills, and vice versa. 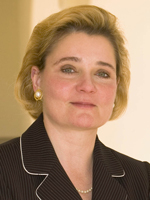 A native of Brooklyn, N.Y., Naughton was a scientist first, only learning the business side when she started her first company, Advanced Tissue Sciences Inc., in 1991. The technology Histogen is based on is from Naughton's own research.

While Histogen can be considered a stem cell company, the treatments the company is working on uses a protein secreted by stem cells, rather than the actual cells themselves. The company gets the protein using a unique strategy.

"The whole premise of Histogen is that if you go and grow human cells under conditions that are embryonic-like, the cells will revert back, and become embryonic," she explained.

One of the advantages scientists have long seen with embryonic stem cells is that they secrete a kind of protein called WNT proteins. These are the proteins that signal to cells how to differentiate, or turn into the various muscle, bone, organ and blood cells they should grow into.

Researchesr believed that they could isolate WNT proteins and use them to stimulate tissue growth and regrow things like organs, skin and hair.

Naughton's discovery with Histogen, which was based on other researchers' work, was that by growing cells in an embryonic environment -- low-gravity and low-oxygen -- within a few days, the cells would revert to their embronic state. This means the company could get WNT proteins without having to drestroy actual embryoes.

"We're not the basic, 'A-ha!' discovery research (company)," she explained. "We're there saying, 'We know the composition of what we have, we know what's unique about it, let's go to the literature and see what other people have found to be important with these and let's go after the therapuetic areas, which are our greatest need right now.'"

While it conducts research on different therapuetic treatments, Histogen has products on the market which help generate some cashflow, though not enough to fully fund the company yet. The company sells a stem cell product, and is awaiting FDA approval for a wound care product.

The hair product could be on the market in Asia within the next two years.

Histogen has suffered some setbacks in the last year. The company had 38 employees until last January, when it was hit with a lawsuit over patent infrigement. Histogen had to lay most of the staff off, but still has 11 full-time employees. Naughton said that after another round of fundraising, they hope to begin rehiring.

The company is currently raising money to expand its hair re-growth trial in Asia.

As both the executive officer of Histogen and the dean of SDSU's business school, Naughton acknowledged that she's a very busy woman. She works about seven days a week, whether it's raising venture funding for the company, reading up on new possibilities for WNT proteins or creating international studies programs for her business students. Still, she said, she wouldn't have it any other way.

"By being able to be involved with both, I keep myself at a good balance," she said. "I love what I do."

Will this treatment help people with vascular ehlers danlos syndrom? I have not been tested but i show all the signs of the syndrom including thin scalp hair and alopecia.