Revolutionizing the way vaccines are delivered is Joseph Kim's goal as president and chief executive officer of Inovio Biomedical.

The company offers a range of vaccines that contain the broken DNA of viruses that affect humans. The company's flagship products include a therapeutic human papillomavirus (HPV) or cervical cancer vaccine, an HIV vaccine and a universal influenza vaccine that could revolutionize the way seasonal the seasonal flu shot is administered.

It was his excitement about DNA-based vaccines that made Kim leave a comfortable job at Merck & Co. Inc. (NYSE: MRK) to start from scratch, founding VGX Pharmaceuticals in 2000 with University of Pennsylvania professor David Weiner.

The two brought technology that originated at the University of Pennsylvania through a license agreement, into a fully developed clinical trial.

Perhaps Inovio's most promising prospect is its universal flu vaccine. The current method of manufacturing the flu vaccine from eggs is archaic, Kim said. Scientists get together once a year to determine the year's most likely strain of the flu outbreak. Vaccines currently administered for a variety of viruses protect against multiple strains and the flu should be no different, Kim said. 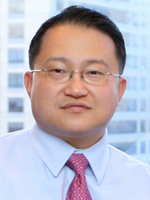 "We felt the way the flu vaccine is generated now is not very good," Kim said.

The flu vaccine Inovio is working on would protect from most strains of the virus and require a booster shot only once per decade, Kim said. In clinical trials the vaccine has protected against the most common strains of flu in recent years and even the 1918 Spanish Flu that caused the deaths of 40 million people worldwide. Inovio plans to begin testing the vaccine on humans next year.

Inovio also uses the strategy with its HIV vaccine, which has been very successful in animal trials compared with competitors' products, Kim said. The vaccine includes Inovio's unique delivery system that uses small pulses to open cell membranes for milliseconds, allowing strands of a virus' broken DNA to enter the cell without causing damage.

Inovio has received $28 billion in funding over the past 24 months from the National Institutes of Health, most of which was allocated to the HIV vaccine, Kim said.

The company's cervical cancer vaccine is different from other products on the market in that it treats women currently infected with the virus. Most HPV vaccines are meant to prevent infection, the most well known of which is Merck's Guardasil.

In order to expand the company's reach, Kim and Weiner recently chose to merge VGX with Inovio back in June. Kim became chief executive officer of Inovio and the company's former CEO became chairman of the board, Kim said.

The transition has been a smooth one for the company. Inovio has "hit the ground running" and made tremendous progress on its array of products since the merger occurred, Kim said.

Kim enjoys working at a company that is managed by scientists. It allows the company to be steered by ideas, he said.

The company's involvement in DNA vaccines is very exciting, Kim said. If Inovio's universal flu vaccine is successful, it has the potential to revolutionize the $4 billion market.

"We can dramatically change the way flu vaccines are administered," Kim said.