Technology allowing patients to participate in own health care 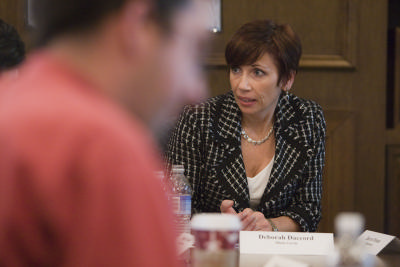 Wellness in the Workplace - Innovations in Health

The health care industry must learn to incorporate technological advances in their treatment of patients, according to a recent roundtable discussion at The Daily Transcript offices.

From smart phones that can monitor vital signs to microchip-equipped pills that notify a doctor when medicine has been ingested, health care has become more patient-centric.

"We're all recognizing that most care is ambulatory -- outpatient -- and we're all moving toward patient participation and personalization of medicine," said Joseph Traube, corporate vice president for medical-informatics at Scripps Health. "That is a challenge.

"Technology enables it now more than it has before. The real cutting-edge stuff, the smart devices that can actually do continuous measurement and call back with the results -- that wouldn't have been possible in the old paradigm, so I think it enhances the continuum of care."

Traube thinks it's a good idea to involve the patient as much as possible in his or her own care.

"In many ways, I think welcoming the patient's perspective is critical in forging any kind of a partnership toward healing," he said. "All too often we sometimes lose sight of that. There's treating a disease and healing a patient, and you've got to have the relationship with a patient in order to achieve that."

He also likes the idea of patients searching Web sites and using search engines to do their own research.

"Why should we be limited to only taking advantage of the expertise in a particular community when we have the Internet?" Traube said. "(If) the best pathologist is at Sloan Kettering in New York, why shouldn't someone in San Diego be able to access that?"

Darrell Drinan, president/CEO of PhiloMetron, a San Diego-based developer of wireless diagnostic products, said patient participation -- or the consumerism of health care -- has led to a new model of innovation.

Instead of spending millions of dollars in research, medical companies can develop a successful product by using a splashy ad campaign. He said the Wii Fit by Nintendo, which is now being used by numerous physical therapists, is an example of the new model.

"The traditional clinics and medical device and technology companies move like grass grows -- very, very slowly," he said, caused mainly by having to conduct studies.

The Wii Fit, by contrast, took off shortly after it was introduced and its value was quickly realized.

"The market is astronomical," Drinan said. "A lot of it's related to fitness, but you're going to see some of it leaking back into other chronic disease-related issues right now. You're seeing it with genomics, trying to sell direct to the consumer."

The technological advances are not limited to smart phones and video games.

The University of California, San Diego Medical Center has a telemedicine program. As part of the program, high-resolution cameras have been deployed in various facilities throughout the county. These cameras allow a patient in one hospital to be diagnosed by a specialist in another facility.

"Our neurologist can sit at any computer and look at the patient and determine whether or not certain medications should be administered," said Mona Sonnenshein, interim CEO/president of UCSD Medical Center. "And in rural areas, like El Centro, that is really fantastic. It really can save lives and restore function to someone who would otherwise not get it and could have the really devastating effects of a stroke."

The value of medical imaging will become key to improved care as hospitals use advances in the area of x-rays, video cameras and digital photo micrographs to diagnosis patients from afar.

"Pictures are worth a thousand words," said Traube of Scripps Health. "Now (an image) is available and becomes an electronic file. I think that's going to be a huge benefit in improved care because it takes the distance equation out. You can be anywhere."

Hospitals also are converting their paper files into electronic records, making them easier to access and eliminating transcription errors.

The switch to electronic medical records has caused some hospitals to rethink how they process patients. As Palomar Pomerado Hospital builds a new facility, officials are designing rooms that would eliminate the need to continuously move a patient throughout the facility, which is a common practice.

"You move multiple times when you're in a hospital," said David Tam, Palomar Pomerado's chief administrative officer. "And what that does is, you rely on a paper record that goes from nurse A to nurse B to nurse C. If the system goes down, you want nurse A to be with you the whole time.

"If we go completely electronic, we have to minimize patient moves within the hospital."

However, when a patient needs to be transferred to another hospital thousands of miles away, electronic records makes it easier for a patient's medical history to move with him or her.

"The ability of UCSD to be able to talk to Mass. General Hospital is probably one of the most critical things out there for patient care," said Deborah Daccord, a partner with roundtable sponsor Mintz, Levin, Cohn, Ferris Glovsky and Popeo.

E-records also have allowed patients to get easier access to their own files, some of which they decide to share with family members. There are Web sites in which people can update their health status, viewable by friends and family, much like a social network.

Despite all of its advantages, there is concern over the security and privacy of medical records, roundtable participants said. As medical information becomes more readily available, it will be important to ensure that insurance companies can't deny enrollment to a patient because of a pre-existing condition, according to Daccord.

"The opportunity is going to rest with those who can allay consumer fears about the maintenance of the privacy of those records," she said.

Karen Lovitch, a partner in Mintz Levin's Washington, D.C., office, said another legal issue surrounding e-records is the liability when a system fails or the power goes out. One company is requiring hospitals, in its form contracts, to hold them harmless if there's a system failure.

"That's a really big issue and something that hospitals have to grapple with in their negotiations for these systems," Lovitch said. "Who's going to be liable if there's system failures? And that goes down the line, too, because there could be a system failure that then affects a patient, and then who's liable to the patient? Is it the hospital, is it the records company, or maybe it could be both."