Local health care and community leaders gathered Feb. 19 to celebrate the opening of the Scripps Proton Therapy Center, the first such cancer care facility in San Diego County to provide this highly accurate form of radiation therapy and the first in the nation to treat patients exclusively with "pencil-beam scanning," the most precise form of proton therapy available.

The 102,000-square-foot facility in Mira Mesa will be a resource not only to Scripps physicians and their patients, but also to Rady Children's Hospital-San Diego and UC San Diego Health System, whose affiliation with Scripps Health was announced at the event.

Scripps Proton Therapy Center is the nation's 15th proton facility, and just the fourth west of the Rockies. When fully operational, the $220 million center will have the capacity to treat up to 2,400 patients annually. Scripps Health provides the center's clinical management and Scripps Clinic oversees the medical services. Advanced Particle Therapy is the center's developer and owner.

The primary benefit of proton therapy is its ability to treat patients with a substantially lower total radiation dose to normal tissue, compared to the latest X-ray technology.

"X-rays penetrate entirely through the body, whereas a proton beam can be controlled to stop where the tumor stops," said Carl Rossi, M.D., the center's medical director. "This is important, because less radiation to healthy tissue means patients are more likely to tolerate their treatments better and are less likely to have problems in the long run related to their treatment."

For example, compared to X-rays, a proton beam can effectively target prostate cancer tumors with less exposure to the bladder, rectum and small intestine. With breast cancer, it can treat the left breast without exposing the heart to radiation. And with lung cancer, protons will spare more of the patient's spinal cord, esophagus and bone marrow.

"For children with specific types of tumors, proton therapy is particularly effective because it is very targeted and spares healthy, developing tissue from further damage. It has been found to be particularly effective in brain tumors where secondary radiation can lead to learning disabilities, reduced IQ scores and other potential lifelong side effects. Proton therapy can also reduce the long-term likelihood of secondary radiation-induced tumors," said Donald B. Kearns, M.D., acting president of Rady Children's Hospital-San Diego.

Because of its exceptional accuracy, proton therapy can in some cases enable doctors to safely deliver a higher daily dose of radiation to the tumor than is possible with X-rays. This technique, known as hypofractionation, can translate to faster cancer control and fewer treatment sessions. 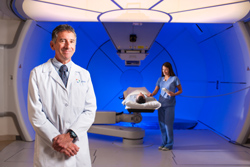 Today, most proton therapy is delivered using the traditional "passive scatter" approach, in which the beam is shaped to match the tumor after exiting the treatment nozzle. With passive scatter, the beam passes through specially manufactured devices to form the beam's height, width and penetrating depth, before entering the patient.

The Scripps center will be the nation's first to exclusively treat patients with pencil-beam scanning, which is more precise and versatile than passive scatter. Instead of using physical devices outside of the treatment nozzle, pencil-beam technology electromagnetically shapes the beam inside the nozzle via computerized data files, developed from 3-D models of patients' tumors.

Pencil-beam technology sweeps the beam across the tumor in fine strokes, building up the radiation dose onto the tumor layer by layer. The penetrating depth of the beam is controlled digitally by an energy selection system, which varies the energy of the protons.

According to Dr. Rossi, using pencil-beam technology to treat tumors is like using a very fine paint brush to apply the radiation, whereas earlier proton technology is more like using a can of spray paint. 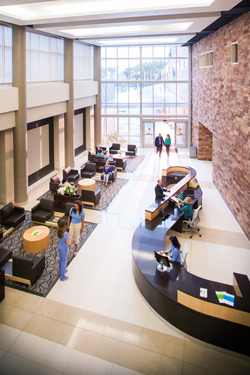 The center's technological centerpiece is a 95-ton superconducting cyclotron, where the proton beam is generated using hydrogen and oxygen to create a plasma stream. Protons are extracted and accelerated to roughly 100,000 miles per second. They are then delivered to a beam transport system, which uses a series of high-powered electromagnets to steer and transport the beam to one treatment room at a time using a vacuum line.

Research studies have shown the effectiveness of proton therapy in treating a variety of tumors – particularly solid, localized tumors that are surrounded by critical organs. These include tumors of the prostate, head and neck, breast, spine, lung and gastrointestinal tract, among others. Protons are also the preferred form of radiation for many childhood cancers because growing bodies are especially sensitive to the potential short- and long-term side effects of radiation.

Scripps Proton Therapy Center is designed with five treatment rooms, three of which include gantries, which rotate around the patient 360 degrees to allow treatment from any direction. The center's other two rooms are designed with fixed-beam machines. The facility is currently treating patients in select rooms and projects commissioning and clinical use of all treatment rooms in 2014. The center offers on-site access to the sophisticated imaging technology needed for accurate tumor targeting, including CT and PET-CT scanners and an MRI machine.

Scripps Proton Therapy Center is designed to provide a comforting, emotionally supportive environment for healing. This includes a lobby with large expanses of glass for natural day lighting, modular stone walls and wood and tile design accents. Children and their families will have access to special areas designed specifically for pediatric patients, including a dedicated entrance, anesthesia area and recovery room.