Evolution of a law firm

For someone who originally did not intend to be a practicing lawyer, John Gartman (News) of Fish & Richardson exudes a passion for the messy and stressful business of trial law.

He is set to relinquish his position as the strategic managing partner of Fish & Richardson, partly because "my clients want and deserve every minute of personal attention I can give them." 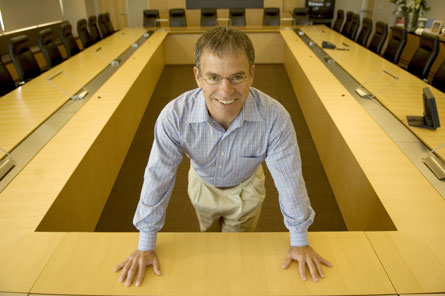 But his decision to step down is also indicative of the evolution of Fish & Richardson's base in San Diego. The San Diego office is based around "great lawyers," he says. "We have always opened our offices based upon mostly people, rather than a strategic vision for where we need to be. We call it opportunistic development."

"I took the job of managing principal in 1998 because the office needed senior leadership, passion and commitment to become a major force in Southern California," Gartman says. "That job is now complete."

He later jokes that he only has an attention span of two years, and freely admits to being "bored" for large parts of both his electrical engineering degree and his subsequent law degree.

But that boredom dissipated when he started getting involved in intellectual property litigation. Gartman describes it as "fascinating," saying, "I might have to spend a year learning about voice mail ... then after a couple of years put it all aside and learn everything there is to know about Mpeg, then computer keyboards ..."

Learning the technology inside is a key part of Gartman's trial preparations: "I think you need to learn it better than people who did and then walk back and say, who is my audience and how simple can I make this so I know that if I am speaking to a juror with a 12-year education they can understand it."

"It is not uncommon for me to go to a book store and get a 'For Dummies,' and I will work my way up until the witnesses are convinced that you know more about it than they do even though they created it."

This keen interest in the technological details and background of cases reaped rewards in the 1997 case Quantel Ltd. v. Adobe Systems Inc., 96-18RRM (D.Del.). Gartman unhesitatingly cites this victory over Quantel as his biggest professional achievement and it was also noted in the National Law Journal as one of the year's top 10 wins for the defense.

Quantel, a subsidiary of U.K.-based Carlton Communications, had sued Adobe (Nasdaq: ADBE) charging that its Photoshop products infringed on five U.S. patents Quantel had been issued between 1986 to 1993. These patents covered procedures for creating artwork with a computer, including the use of soft-edged brushes, an onscreen palette, and simple cutting and pasting.

Prior to the Adobe case, Quantel had successfully forced other computer graphic companies out of business. The company was seeking $138 million in damages from Adobe and seeking to prevent it from selling Photoshop.

Gartman is clear that his team was aware right from the start of the case's importance for the entire software industry. "If we had lost that case there would have been no Adobe Photoshop, there would have been very few computer graphics companies that could have survived the onslaught from Quantel," Gartman says.

The case, he says, was an opportunity to "correct history," where losing was not an option: "I can honestly say the world would not be the same today if we had lost that case."

At the heart of the case was the issue of prior art. In order to invalidate Quantel's patents, Adobe contended that the British company had "misrepresented the nature of prior art" when applying for U.S. patents and that in fact the concepts these were based on were well known in the public domain.

To prove this, the Fish & Richardson team had to go back through the archives and attics at the New York Institute of Technology to find 20-year-old computer imaging software. This then had to be transferred from old-fashioned reels into a modern medium that could work on Windows and be shown to the jury.

"The fun thing about that was that I got to examine the guy who did it all and when he testified in front of the jury, you could just see coming out of his persona the happiness and joy of seeing something that he himself had not seen for 20 years.

"And when you looked at his face and you could see it come up on the screen -- that is when I knew the case was over, because the jury knew that he had done it."

Gartman ties the firm's victory against Quantel into his vision of trial law -- the favorite part of his job.

"We understand that when you are talking to jurors you have to tell a good, simple, powerful story that does two things. It is legally and technologically correct, but it is also emotionally correct. Because if a juror's emotions are not with you, it doesn't matter whether you are right or not."

SPECIAL REPORT: Find out what's going on in today's competitive IP market in this annual spotlight.

He puts success in the case down to the discovery of the visual evidence that none of the previous defendants had been able to find, saying Fish & Richardson's case was "both more creative and it was relentless."

Gartman is now involved in another case that could have similarly serious implications for the software industry. In 2003 his client, Microsoft (Nasdaq: MSFT), filed a suit against Lucent Technologies (NYSE: LU) in response to several patent infringement suits filed by Lucent against Dell (Nasdaq: DELL) and Gateway (NYSE: GTW). Microsoft has stepped in, as the underlying technology at issue is Microsoft's.

The software behemoth is seeking a declaratory judgment that Lucent's patents on a range of technologies are either invalid or not infringed by Microsoft.

"The case is probably the most diverse and complex of any I have been involved in," he says.

No date has yet been set for the trial, but one thing is certain: The computing and intellectual property community will all be watching closely.

Send your comments, thoughts or suggestions to emily.cadman@sddt.com