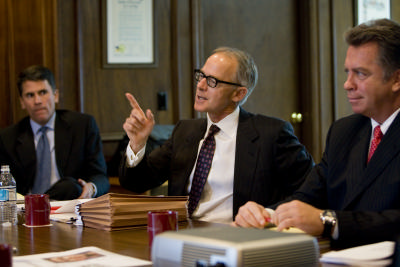 The American patent system is being slowly, dramatically reshaped by a three-pronged

assault from the Legislature, the courts and the patent office.

rely on strong patent protection, according to a recent roundtable hosted by The

San Diego, which boasts a thriving biotech industry, isn't the only region that could be

negatively affected in the long term.

"This is a national phenomenon that's going to have a significant impact on industry,

and we have to do everything we can to address these concerns," said Harry Leonhardt,

"I'm all for the normal ebb and flow (of patent law), but these kinds of drastic changes

are unnecessary. They're applying a standard in one industry that is completely wrong

Most of the changes, according to the four panelists, are being driven by the high-tech

and software industries, which are being hit with multimillion-dollar infringement

property, not with the intention of bringing a product to market, but to make a profit

"The high-tech industry was getting hammered with these huge verdicts," said Eric Acker,

a patent attorney with Morrison & Foerster, which sponsored the roundtable.

Additionally, the technology behind most high-tech and software companies almost becomes

Drug development for biotech and pharmaceutical companies, by contrast, takes time and

requires intellectual property rights to be guaranteed throughout the process.

timelines, it's very difficult for us to make these investments when the rules keep

changing by who happens to be on the Supreme Court," said David Urso, a venture

Urso would like to see companies given at least a 10-year window of market exclusivity,

with the option to apply for additional time if they meet certain guidelines.

"If you take that risk on and you provide that benefit to society, I don't think you

should be rolling the dice on whether you're going to have market exclusivity," he said.

"I think you're entitled to a period of recouping your costs and making a profit.

The U.S. Supreme Court has ruled on at least four major patent-related cases in the past

two years, a marked increase from its previous activity on the subject.

in the United States," said David Doyle, an intellectual property attorney for Morrison

& Foerster. "This is an area, intellectual property, that has been incredibly sleepy up

until the last 10 years. Today it's a front-page story. That is really a dramatic

In one case, the high court lowered the standard for obviousness, making it easier for

accused infringers to prove the patent is invalid.

pro-patentee, pro-patent perspective to more of a hostile attitude towards patents and

The U.S. Patent & Trademark Office recently adopted a series of new rules that would

continuations that can be filed per case. A court has enjoined the PTO from enforcing

the rules until litigation surrounding the rules is resolved.

In Congress, lawmakers have been proposing sweeping changes to the patent system for

several years, which would switch the United States from a "first to invent" system to a

"first to file" system, among other changes.

Doyle said the high-tech industry has "won the battle of public perception and, to some

extent, judicial perception that the danger of patent abuse outweighs the value being

Part of the change also is driven by policy, Leonhardt said, and the desire for the

patent office to limit the number of applications it's receiving. Last year, more than a

quarter of a million patent applications were filed. The patent office's resources

aren't growing as fast, however.

"We need, in the San Diego community, to enhance our lobbying efforts," Leonhardt said.

"Certainly high-tech is doing it. We need to get back out there and address these major

issues. It's in everybody's best interest in this community to do that."

companies that have a patent pending. Not anymore, Urso said.

paying you while developing a drug, it becomes more risky for an investor," Urso said.