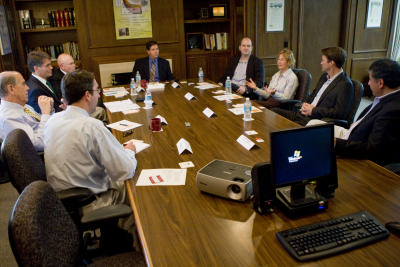 The U.S. patent system doesn't need a major overhaul, according to a panel of industry officials who are skeptical of Congress' recent attempts at reform.

Representatives of both the pharmaceutical and software industries, along with a pair of patent attorneys, discussed the issue at a Daily Transcript roundtable sponsored by Mintz, Levin, Cohn, Ferris, Glovsky & Popeo PC and the University of San Diego School of Law.

"Small fixes -- fix the patent term, fix the publication procedure -- those bring value to the entire system," said Christine Gritzmacher, senior director of intellectual property for Gen-Probe Inc. (Nasdaq: GPRO). "But to declare the entire system broke and have Congress swoop in and try and fix it by changing the laws, which leads to more uncertainty, is not a fix.

For the past four years, legislators have been working on fairly significant modifications to the patent system, partly to harmonize with the rest of the world. Other changes are aimed at reining in "patent trolls," those companies or individuals who use their patent portfolio to collect licensing fees with no intent of making a product.

"What you risk by trying to solve the trolling problem, and not the patent quality problem, is throwing the baby out with the bath water," said Michael Hartogs, a senior vice president at Qualcomm (Nasdaq: QCOM). "The system in this country is second to none in allowing the small guy in the closet to develop groundbreaking inventions (where) he can reliably expect compensation he is entitled."

Hartogs bristles at the label "patent troll." He said it's used too loosely, claiming these "non-practicing entities" are the last resource for many struggling companies whose intellectual property is their only asset.

"The propensity to pejoratively accuse people of being trolls or of trolling activity, I think, is particularly dangerous for our economy," Hartogs said, adding, "It's an understandable reaction from the manufacturing industry that faces a lot of suits."

Instead, he said, the quality of patents needs to be addressed, because if the quality is higher, companies will be able to withstand the challenges.

While Qualcomm derives a lot of business from licensing, it's also a big supporter of innovation and strong patents.

"We're highly motivated to ensure people, like our founders, have the opportunity to shake up the world," Hartogs said.

Some of the problem of patent quality lies with the U.S. Patent & Trademark Office, according to the roundtable participants.

The patent office has been hurt by a high turnover rate -- estimated at 30 percent -- and a heavy backlog of patent applications.

"It's very difficult for the small pool of patent reviewers to know everything about everything," said Dan Figueroa, director of legal and business affairs for Sony Computer Entertainment America. "They're really being overrun I think. When I see some of these patents people are giving us a demand on, I think, 'How did that issue?' These people really don't know our business."

Gen-Probe's Gritzmacher said not only are there too few examiners with the requisite expertise, but there's not enough prior art for them to refer to. She also is concerned about the issuance of "junk" patents.

She'd like to see the patent examiners get more sufficient training and be required to have a more extensive background.

"The European patent examiners really are a different class of examiners," Gritzmacher said. "You cannot train people and get people up to speed and develop them professionally if they're leaving at that (30 percent) level on a national basis, "and that's what's weakening the patent system."

According to Qualcomm's Hartogs, European patent examiners are viewed as a highly professional class with most being highly compensated.

"Here we relegate them to true public servants, and it's reflected in quality of patents we get," he said.

Figueroa, the Sony executive, said prestige should be attached to the position of patent examiner in America.

"It's surprising that something that has such a huge effect on the American economy as the U.S. patent office is considered pretty much considered a government backwater," he said. "It's an afterthought."

Jim Cleary, a partner with Mintz Levin, said patent attorneys share some of the blame in the deterioration of patent quality.

He said the patent at issue in the recent Federal Circuit decision In re Bilski came from a poorly written application.

"Patent attorneys have to maintain that high level of quality as much as they can in the face of tighter and tighter budgets, and higher hourly fees," Cleary said.

Butler said the pharmaceutical industry depends on strong patents because its products require an average of $1 billion and 10 years to get to the market, with many failures occurring during the development process.

"That's a huge bet to make up front," he said. "The only way we can recoup our investment is the exclusivity that patent protection allows."

Gritzmacher feels legislators are trying to fix the wrong part of the patent system, including the post-issuance process.

While lawmakers continue unsuccessfully at reform, the U.S. Supreme Court has issued a series of significant rulings that have begun to change the patent system.

The roundtable participants, however, don't think the Supreme Court's recent interest in patent law is necessarily a good development.

"(When) you get inexperienced patent examiners and hand them Supreme Court cases that they can read broadly, and it's like handing them the golden key to lock you out of the patent office forever," Gritzmacher said.

David McGowan, a professor at the University of San Diego School of Law, said he thinks the Supreme Court's recent flurry of activity in the patent realm is about over. He expects to see a steep drop off in the justices' interest in patent cases in the near future.

Part of it is the Federal Circuit's desire to once again take the lead in patent cases.

"One way you can read In re Bilski," McGowan said, " is the Federal Circuit is saying (to the Supreme Court), 'We know you're interested in this. We'll just do it ourselves so it will get done properly.' After Bilski, I don't think there's going to be a lot of political pressure for the Supreme Court to take patent cases."