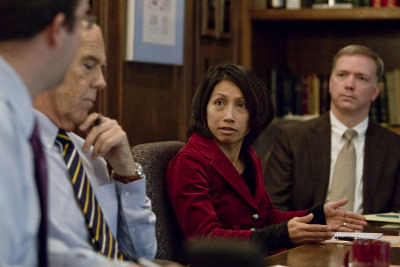 Intellectual property experts discussed the effect patent reform proposals could have on area businesses during a recent Daily Transcript roundtable sponsored by Townsend and Townsend and Crew.

Legislators have been trying for years to overhaul the country's patent system with little success.

One of the major sticking points has been how to deal with the awarding of damages in a patent infringement case. One suggested solution is apportionment, where an infringer would have to pay based only on a portion of the product they infringed rather than for the whole device.

Bruce Greenhaus, vice president and chief patent counsel for Entropic Communications, said it can be detrimental to the business community -- and commerce in general -- if damages are inappropriately measured.

"It can cool the competitive environment and make it difficult for businesses to start up and flourish if they have to pay too high a royalty on patents that others don't," he said.

"But, by the same token, I'm concerned that damages might be reduced to the point where it's very difficult for an entity to justify making the investment necessary to come up with innovation in today's complex technology."

Apportionment could really affect San Diego-based chipmaker Qualcomm (Nasdaq: QCOM), whose licensing division represents a significant part of its business model, especially if damages are narrowed so much it's difficult to recoup any money.

San Diego patent attorney Shane Hunter said from a defensive standpoint, however, apportionment could be good for a company like Qualcomm.

"People talk about patents being either swords or shields," said Hunter, a partner with Townsend and Townsend and Crew. "Patents are never shields. They're always swords. You can only attack somebody, it's just how big your sword is. So when you're defending, apportionment will make your sword into a letter opener, potentially."

"So many times the startup companies are concerned about initial costs and the 'first to file' is going to push up costs for patent filings much sooner than maybe they're ready for," he said. "That's going to limit people, and they'll end up forfeiting a lot of international rights because of it."

Liz Bui, director of intellectual property and corporate development for Novocell Inc., said data exclusivity is an important issue for the area's biotech and pharmaceutical companies. While it's not included in the current set of patent reform proposals, data exclusivity is being talked about as part of the health care debate.

"By the time you actually have a commercial product, you have a very short patent life," Bui said. "You can't necessarily capitalize on that. It's not equitable, at least from our vantage point, just to have five years."

Ram Seshan, vice president of technical development and commercialization for Santech, also likes the idea of a lengthy period of data exclusivity.

"In this day and age, so much goes on in analyzing data," he said. "It takes awhile in real time to gather data and process the data and then augment the product better. For that period, we want as much exclusivity as we can."

Several panelists said any attempts to weaken the patent system is not good for San Diego's flourishing biotech industry, which traditionally invests millions of dollars and many years on a single drug.

"If you make it so you can't recoup that billion dollars by lessening or weakening the value of the patent, those business models have a much more difficult time thriving," said Tom Franklin, a partner at Townsend and Townsend and Crew in San Diego.

Shawn DeKalb is the president of Product Development Systems, which helps many startups in the San Diego area. He said his clients' greatest fear is how to protect its intellectual property, especially with tight budgets.

"I think the economy, which has forced now a lot of patent firms to go with fixed-fee pricing for new patents and continuations, has been very beneficial for the small startup types," he said.

The lack of deep pockets can really hurt during litigation, he said.

"If (the little guy) doesn't have a lot of money to defend himself, he does not have a chance to win," DeKalb said. "And a lot of my clients today, that's one of their first questions: 'How much money do I need to have in the bank to defend myself to even have hope that I could win if somebody comes after us.' "

Franklin, an attorney at Townsend, said it's unlikely a patent reform bill will get passed during this session of Congress.

Most of the highly contested issues are getting resolved by the courts anyway, according to Entropic's Greenhaus.

"They're very, very aware -- at both the Supreme Court and the Court of Appeals for the Federal Circuit -- of the issues that are causing patent reform to be a hot topic," he said, "and they've dealt with a lot of the more contentious issues."

DeKalb, for one, is glad to see the Federal Circuit take the initiative.

"The Federal Circuit tends to be a lot more knowledgeable, obviously," he said. "The Supreme Court tends to muck things up a little bit and Congress mucks it up more than the Supreme Court. So thinking that Congress is going to come out and revamp the law -- we're working with Congress-generated laws to begin with -- it's a little scary what's going to come out of that process."

"One of the major sticking points has been how to deal with the awarding of damages in a patent infringement case." The market knows best. Once infringement is found, you either pay the owner or don't use. Thee is no simpler or better way. Free market injunctions! You wouldn't ask a court to rule how much you should pay for a new car.