Panel: Legislators not best ones to reform patent system 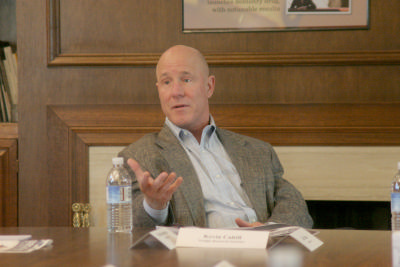 For years, lawmakers have been trying to pass a comprehensive patent reform bill with little success.

But that’s not necessarily a bad thing, according to some legal watchers.

Several participants in a recent Daily Transcript executive roundtable said they are quite happy with the current system, preferring changes to come through either case law or the U.S. Patent & Trademark Office.

“The way Qualcomm approaches patent reform is we would like to see it very narrowly tailored so that it doesn’t undermine the fundamentals of the patent system and the incentives that our existing patent system creates,” said Mark Snyder, vice president and patent counsel for the wireless chipmaker.

Kevin Cahill, business counsel at the Scripps Research Institute, said he would like the courts -- perhaps even the Supreme Court -- to more clearly answer the question of what is patentable subject matter.

“We are heavily reliant on patenting, being a life sciences and research institute,” he said. “And if you don’t have that clarity, we don’t have value, and we don’t have anything to license or sell.”

The judiciary, however, also has its critics, and some of its recent decisions haven’t come without controversy.

“It seems to me it’s the Supreme Court that tends to mucks things up,” said Mike Havluciyan, assistant vice president legal and business affairs for NexBio Inc. “They seem to want a more fluid, less strict application of patent law as opposed to the Federal Circuit, which seems to like more clear rules on what’s patentable and what’s not patentable.”

One of the factors driving patent reform is the desire to curb the amount of litigation being brought by non-practicing entities (NPEs), which are sometimes derisively referred to as patent trolls.

Snyder said not all NPEs are bad, and that the dubious ones can be filtered out by the patent office.

“We look to the patent office to continue to improve the quality and strength of patents coming up,” he said. “And as that evolves, we’ll see a reduction in these so-call patent troll-type cases.”

One key patent case which could affect NPEs is currently before the U.S. Supreme Court. In Microsoft v. i4i, the issue being debated is what standard is needed to invalidate a patent being asserted against you. The current standard is clear and convincing evidence, but Microsoft (Nasdaq: MSFT) is arguing for a less strict “preponderance” of evidence standard.

Ted Sichelman, an assistant professor at the University of San Diego School of Law, said a decision for Microsoft won’t likely affect litigation brought by non-practicing entities because their patents are much stronger now than the average patent.

The companies are doing more research before they acquire patents to see which ones will survive litigation.

“Part of it is the sophistication of the industry as they have more and more money,” Sichelman said, estimating the top 10 funds have $2 billion to $3 billion of capitalization. “With that level of sophistication in the industry, now they’re really digging down in terms of types of patents they’re purchasing.”

James Cleary, an intellectual property attorney with roundtable sponsor Mintz Levin Cohn Ferris Glovsky and Popeo, said the reforms the patent office has instituted are working. The initiatives are designed to reduce the massive application backlog, which has reached 34 months in some cases.

“We’re seeing a lot more receptiveness by the examiners to conduct interviews and discuss the prior art,” he said.

Some roundtable participants would like to see the examination time reduced to between 20-24 months, but Cleary warns exams shouldn’t be done too quickly because then some relevant art could be missed.

“We tell clients this might be a difficult exam, a really sharp examiner,” Cleary said. “But in the end, it’s going to benefit you. You’ll have a stronger patent, be more enforceable and easier to commercialize.”

Despite the desire by some to leave reform to the courts or the patent office, Congress will continue to work on drafting patent legislation, leaving many to wonder what it will do to the current U.S. patent system.