Lending environment improves, but many entrepreneurs still waiting on sidelines 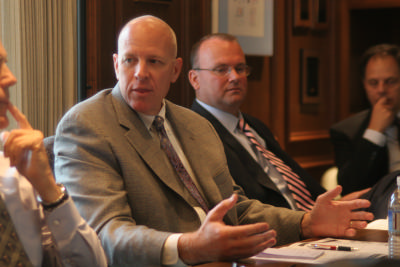 Banks’ ability to lend has returned, however, demand for loans remains very weak, members of the industry said during a recent Daily Transcript Executive Roundtable.

There is little funding available to support entrepreneurs.

“The problem with lending is not on the supply side,” said Dennis Uyemura, chief financial officer of California Bank & Trust.

Entrepreneurs are accessing Small Business Administration financing, in part because they are unable to finance start-up costs with credit cards as they were in the past, said Butch Dorian, market president of Mutual of Omaha.

However, some entrepreneurs are choosing to hold out, with financing rates often in the same ballpark as a credit card, said Alan Lane, president and CEO of Silvergate Bank.

Though the environment is tough for small businesses, it’s not all bad news for business. The balance sheets of large corporations are generally strong at the moment, said Ellis Smith, principal with Messner & Smith Investment Management Ltd.

“Corporate America is in better shape than it’s been in years,” Smith said.

The current level of uncertainty caused by a host of new government regulations has many would-be entrepreneurs waiting to make their next move, said Michael Perry, president and CEO of San Diego Trust Bank.

Businesses are waiting to see how their employees’ health premiums will rise due to health care reform, and the tax rate for next year has not yet been released, Perry said.

The legislation has created tens of thousands of new regulations that will make it very difficult for small banking institutions to comply, said John Tippetts, president and CEO of North Island Credit Union.

Before the financial meltdown, Americans had thought of the nation’s largest banking institutions as “too big to fail,” said Wendell Daniel, a partner with accounting and advisory firm Squar Milner, which sponsored the roundtable discussion. However, the catchphrase will soon be “too small to comply” when it comes to small banks coping with new regulations set forth in the Frank-Dodd bill.

The legislation will put pressure on small and midsized banks to grow. Some banks will fail, and the end result will be a large gap in the size of the nation’s banking institutions, Perry said.

Midsize banks will strive to grow to the size of the big four banks to allay some of the cost of complying with the regulations, said Paul Rodeno, president and CEO of Security Business Bank.

“They will either grow or get eaten,” Rodeno said.

California Bank & Trust is among the midsized banks that will soon feel the pressure, according to Uyemura.

In addition to creating uncertainty for the banking industry, the Frank-Dodd Act fails to bestow regulations on mortgage giants Fannie Mae and Freddie Mac, which caused the mortgage meltdown, Lane said.

However, regulating the two “semi-for-profit” quasi-government agencies would be very difficult, Perry said. The two agencies currently buy nine out of 10 loans, and without them the mortgage market would crash.

Despite a reasonable demand for mortgages, housing prices remain low. Many people are sitting tight while unemployment continues to rise, Perry said.

“If I were to put that loan on my books (without FHA), my regulator would kill me,” Ganz said.

The new financial regulations are causing a significant shift in the way banks do business, and go “too far,” Dorian said. However, participants said reform was absolutely necessary.

“There’s definitely some repricing going on,” Dorian said. “But let’s be honest, we don’t want to go back to the way we used to lend, do we? I mean, it was fundamentally wrong.”