By PADMA NAGAPPAN, Special to The Daily Transcript
Friday, December 30, 2011

To be the CEO of two early-stage companies, at the same time, and working with two brilliant serial entrepreneurs is not an easy task, but Diane Goostree handles it with aplomb.

One of those companies, Scan Physics, is developing a novel, non-invasive breast imaging technology, while the other, Intrepid Therapeutics, focuses on dermatology drug development.

A chemical engineer, Goostree has been involved with pharmaceuticals and medical devices for 25 years, of which 15 have been in senior executive roles.

She’s led several early stage companies, which involved raising capital, taking them to commercialization and going public, but she began her career working for large companies like DuPont and Bayer. 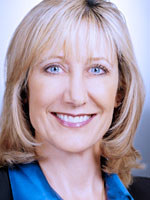 She moved on to increasingly senior roles at Skin Medica, where she helped grow the company and raised $90 million in venture capital, and Artes Medical, where she transformed the aesthetic pharmaceutical research and development company into a commercial organization as its CEO, taking it public.

Today she focuses on strategic planning for the two startups she leads, of which she is also a co-founder. When asked how she could be CEO of two very different firms at the same time, she laughed.

“They are both very early stage companies and they agreed I could straddle both positions, they both have very involved founder chairmen,” Goosetree said, adding that she expects to be with them for a couple years before having to choose, and that either of the companies may be acquired quickly.

Goostree has had a storied career in management in a field where there are still not very many women at the top levels.

“What I’ve seen as others have in the past five years is that venture capital is contracting, it’s more difficult for companies to go public. What that means to me is one has to have better technology and strategy to get funded,” she said.

“You have to have breakthrough technology or something the market really needs. I’ve been very selective.”

Jim Lemke, a physicist with nearly 100 patents to his name and a successful serial entrepreneur is the founder chairman of Scan Physics. He was looking for a female CEO to lead the company, given that it focuses on breast-imaging technology.

“Diane is a quick thinker and strategic planner who knows her way around the FDA regulation maze and is well-respected. She’s a very good CEO and first-class manager,” Lemke said. “We think we have a good product and Diane is going to help us bring it to fruition.”

Goostree counts both Hale and Lemke as her mentors. Hale is the founder and chairman of Intrepid, and has worked with her for several years at different companies.

She loves being involved in the early stages of a company.

“Being an entrepreneur is challenging, but a lot of fun,” she said.