By PADMA NAGAPPAN, Special to The Daily Transcript
Friday, December 30, 2011

Judy Muller-Cohn was working as an entomologist at Mycogen, a Dow AgroSciences retail seed company that develops and markets corn hybrids, when a freezer broke down and they lost some samples.

This got her thinking and the idea of storing samples at room temperature was born. It took a few years to develop the idea that is the core of Biomatrica, a San Diego-based company she and her husband Rolf Muller co-founded in 2004.

The company has received $17 million in funding from angel investors and two small venture capital firms.

As an alternative to expensive and space-consuming cold storage, Biomatrica offers SampleMatrix, a technology that enables biological materials like nucleic acid, proteins, cells, viruses and vaccines to be stabilized, stored and shipped at room temperature.

The technology is based on anhydrobiosis, or life without water, a mechanism used by certain organisms to preserve their body functions for durations over 100 years. 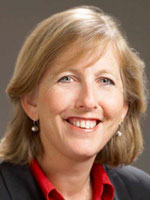 “It’s like shrink wrapping something, only you don’t cut it open, you add water. We use biomimicry for our technology,” Muller-Cohn said.

She holds a doctorate from the Pasteur Institute in Paris and specialized in entomology and molecular biology. Her husband also got his Ph.D. from the same institute.

Coming from a business family, she decided to move into management after a stint working as a scientist. Biomatrica is the couples’ third enterprise.

While still in Paris with her husband, her entrepreneur grandparents asked her to come back stateside, because they wanted her to be closer to them as they aged.

“San Diego is great for biotech, so we moved back here. Rolf was working at Scripps Research Institute and I was pregnant with our fourth child when we began Biomatrica,” Muller-Cohn said.

The company now has 23 employees, mostly scientists including those who head marketing. She and her husband have clear-cut roles; he manages research and development and is the chief scientist while she oversees strategy, finance and commercialization.

Biobanking has been a big market for their technology, with cord blood registries, institutes like the Smithsonian and Susan G. Komen for the Cure using it to store tissue samples, microbes and cord blood. Forensics is another big market, as is diagnostics.

“As samples increased from hundreds to millions in genomics, our biostability process was born out of our own need,” she said.

Muller-Cohn estimates the sample-storage market globally at more than $50 billion. “We will go after part of that market, I think improve it and make it more cost-effective,” she said.

Cold storage represents the biggest competition, followed by others working on biostability, but she said those entities do not have the same breadth of services as Biomatrica does.

This year, the biggest advancement came in the form of a product line for liquid samples, which was a significant milestone for the firm. The military represents about half of its sales, with contracts from DARPA and the Army for blood samples.

Eventually, she plans to move her company upstream from storing and shipping to also collecting blood and saliva samples.

Feb. 6, 2012 -- Biomatrica co-founder and Transcript 2012 Top Influential Judy Muller-Cohn discusses her company's mission and how it works with customers that are looking for an alternative solution to preserving biological samples.

Feb. 17, 2011 -- Executive Editor George Chamberlin speaks with Judy Muller-Cohn, CEO of Biomatrica, about her company and its future.