Negotiations are ongoing with the Navarra family, owners of Jerome’s Furniture, to develop a five-block property downtown into what will eventually become the IDEA District.

David Malmuth and Pete Garcia, co-creators of the concept, said they anticipate a deal to be inked within the next few months with the Navarra family, which will jumpstart the development of a cluster of design and creative firms. The partners hope the project will become a model for a sustainable, urban mixed-use district in San Diego.

“We both want to do something truly transformational that is a big, bold economic development initiative that will create many, many clean, high-paying jobs,” said Garcia, who most recently served as a consultant for companies including Walt Disney Imagineering and EMCOR, and developed the first biotech facility in San Diego for Hybritech in the 1980s.

The idea behind IDEA -- which stands for innovation, design, education and art -- is to create a true marriage of design and technology in San Diego. While the city already has a robust technology industry, the design side is “not quite there yet,” Garcia said. The district would spotlight creative design, provide opportunities for the integration of design and technology, and serve as an economic development vehicle for the region. 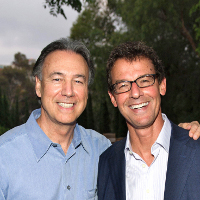 “We’ve got a great base of technology in San Diego, and we’ve been growing that intentionally for last 30-plus years,” said Malmuth, who runs his own development firm and worked on the redevelopment of the New Amsterdam Theatre in New York City and the Kodak Theater in Hollywood. “But what we haven’t done is use those same kinds of intentional strategies to grow design. If we can do that, and specifically create a location for clustering those kinds of creative people, we then have a chance to grow the right brain, and make that as strong as the left brain. Putting them together, we believe we can be an economic powerhouse."

He called the city’s current design industry “diffuse,” with some 18,000 jobs scattered throughout the county.

The proposed district would be marketed to creative industries including architecture, advertising, industrial, digital, graphic, software, fashion and furniture designers as a place to both live and work. It would encompass up to 35 city blocks, where as many as 2,500 residences and 13,000 jobs could be created. Nearly $21 million of new annual revenue could go to the city.

While it may be too soon to outline timetables, Garcia and Malmuth said the IDEA District could become reality within 10 to 12 years.

More immediately, Jerry Navarra, chairman of Jerome’s, has chosen a team including Lankford and Associates, Portman Holdings and Phelps Development to serve as master developer on his family’s property, which includes more than 254,000 square feet on five city blocks bounded by Broadway and F, 14th, 15th and 16th streets. Malmuth and Garcia are part of Lankford’s team.

The “Upper East Village” area is an ideal location for the district, the partners said, because it has flat, walkable blocks with interesting buildings, and an educational component comprising the NewSchool of Architecture and Design and City College.

“Perhaps most importantly, it’s already got all the entitlements in place,” said Malmuth. “It’s got a community plan that gives us the densities and mix of uses that is absolutely ideal for the kinds of things that we want to do. In our business, time is money. So it’s a big time saver to have those things discussed and agreed upon so we can actually move forward and start to create the environment.”

While the developers declined to discuss potential anchor tenants at this time, the NewSchool of Architecture and Design — which is considering expanding or building a new campus downtown — figures importantly in their plans. In the same way that UCSD has incubated and fostered a number of high-tech and life sciences firms around it, Garcia and Malmuth envision the NewSchool nurturing the burgeoning design industry and attracting world-class designers to the area.

Since formally unveiling the concept in May, the IDEA District has been well received by civic, education and business leaders.

“I applaud David and Pete for championing this issue, and Jerry Navarra, whose property will be the first blocks in the project. He selected them as developers, which was very forward thinking,” said Kris Michell, president of the San Diego Downtown Partnership.

“What kind of jobs do we want those to be?” she asked. “We don’t need to diversify the economy; it’s already diverse. What we need is to flesh out what we have, and make it stronger and greater. That is exactly what the IDEA District does. It takes the innovation economy and gives it a place to get stronger.”

Malmuth and Garcia acknowledge the hurdles ahead, including a sluggish economy and the court-ordered closure of San Diego’s redevelopment agency, Centre City Development Corp. Financing continues to be difficult, and businesses remain cautious, Garcia said.

Still, there are signs that governments around the world are beginning to cultivate creativity and adopt design as a viable business approach.

“Cities, countries and states have realized it’s a way to differentiate themselves in a very 21st century way,” Garcia said. “I think people realize now that design is a fundamental way to connect with the human spirit. We’re all hungry for high-tech with high-touch.”