By RYAN PATRUNO, Special to The Daily Transcript
Friday, January 27, 2012

Assiduous entrepreneur James Brennan — co-owner of San Diego exclusive nightclub Stingaree, as well as restaurants Searsucker, Burlap and Gingham — is planning on opening 15 restaurants in the next few years.

“I’ve always been a serial entrepreneur by heart,” Brennan said.

“There are multiple things that make us successful and it starts with the people I work with.”

Brennan has teamed up with executive chef and “Top Chef” celebrity Brian Malarkey to bring their vision of “social dinning” to life, in unprecedented culinary fashion.

“It’s been great working with Brian. He is a very genuine person and has an uncanny ability of relating with people, which is something special,” Brennan said. “And his laughter is very contagious.”

The duo recently opened Herringbone in La Jolla and Gabardine in Point Loma this year. And plans are in the works for another restaurant in Scottsdale, Ariz.

“It’s all about social gathering. Our restaurants are all about conversation, intelligent food, great music, a few cocktails and a lot of laughter,” Brennan said. “We set our restaurants up like it is a superior dinner party.” 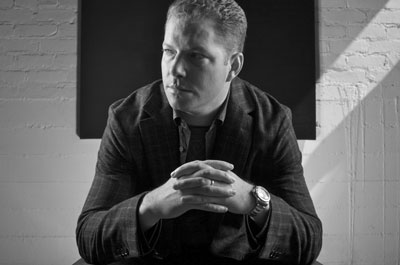 Over the past decade, Brennan has been a part of starting several local nightclubs such as Side Bar, Bar West, Universal and Witherby, along with Ciro’s neighborhood pizzeria. He is currently CEO of Enlightened Hospitality Group and is the chairman at Flank Marketing.

“We have over ten years of experience in fine-tuning what works and what doesn’t work,” he said. “Some people are fooled by the fact that they think they know how to open a restaurant or nightclub, just because they’ve been to one. The truth is it demands long hours and a lot of hard work.”

Brennan began working as a busboy for the Harbor Light [restaurant] in Rockaway Beach, N.Y., at the age of 11 until he was 15. He then went on to work for the Blarney Castle and Connelly’s, where he bar-backed and tended bar.

“That’s where my love of the hospitability industry comes from,” he said. “It’s an exciting industry and the people really intrigued me.”

After high school, Brennan attended the University of San Diego, where he earned a degree in business with an emphasis in marketing and minored in leadership.

Enjoying the San Diego weather and lifestyle, he decided to stay and began working in the real estate and mortgage loan industry, in which he quickly built a reputation as being one of the most successful mortgage brokers in the United States.

“I fell in love with the city, the weather and the people. Plus I made a lot of friends here,” Brennan said.

He even convinced childhood friend Damien Farrell to move here.

“Our moms are old friends, so we’ve known each other since we were in diapers. In fact, we were born just three days apart,” Brennan said.

“One day we sat down and talked about how much he loved it here and wanted to stay. So we started to put a few businesses plans together. We came up with a number of business strategies and we settled on starting a nightclub,” he said.

“We wanted to make a difference in the San Diego nightlife. So we found a few investors and the rest was history.”

The New York-style “ultra-lounge” Side Bar became an overnight success. It was the first nightclub to bring bottle service to the downtown area, according to Brennan.

“The fact we have remained friends and business partnership is a testament to or our friendship,” he said. “I’ve really cherished his friendship over these years and consider him more of a brother than a friend.”

The 39-year-old is also very involved within the community. He currently sits on four boards, including the Catholic Church of San Diego, the Cathedral Catholic High School, Toussaint Academy and Big Brothers and Big Sisters. He is also an active participant in the Big Brother program.

“It’s a really important part of who I am as an individual. I feel it’s always import to give back,” Brennan said.

Brennan has also taken up the cause of supporting Nathan Fletcher as San Diego’s next mayor.

"An old friend of mine once told me when you have a lot of positive influence in the community, you owe it to that community to use that positive influence to make sure the right political leaders are elected to lead the city,” Brennan said. “I am certain he is the right man for the job.”

The father of three children, with another due within the next few months, Brennan claims to have far exceeded his dreams already.

“My passion is building a better community and there’s still a lot of work to do,” he said.