Copyright attorney passionate about clients and their products

Upon entering Andrew Skale's office, a visitor is just as likely to be treated to a magic trick as to receive legal advice.

The shelves and walls of the San Diego intellectual property attorney's workspace are filled with gadgets, toys, prototype devices, innovative products and the ever-present deck of cards.

When dealing with entrepreneurial clients on a daily basis, it helps to have a creative personality.

"I think it would be hard to be one of those attorneys dealing with boring forms or the same issues over and over again," said Skale, a member of Mintz Levin Cohn Ferris Glovsky and Popeo PC and an amateur magician. "Here, it's always something different – clients with different products and different ideas. It makes coming to work exciting."

Skale specializes in protecting his clients' copyrights, trademarks and patents. His office is a clearing house of the cutting edge.

A pair of night-vision goggles is perched on top of a crowded bookcase. A specially designed oxygen tank -- a suitcase-shaped object that converts ambient air into oxygen -- rests against a wall. Two pairs of a sandal/shoe that footwear maker Pony designed specifically for former NFL star Randy Moss sits on another shelf (Moss didn't want them). 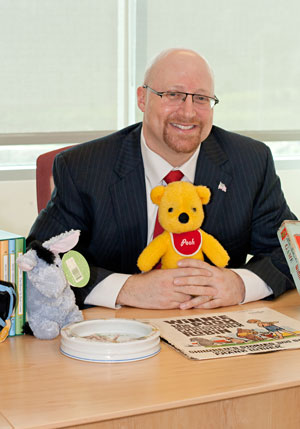 Andrew Skale is a member of Mintz Levin Cohn Ferris Glovsky and Popeo PC. One of his cases involves a dispute over attorney fee awards, trademark registration and whether Disney is entitled to Winnie the Pooh trademarks in Canada. Staff photo: Sarah Strong

"Their intellectual property is probably their most valuable asset, so (I'm) dealing with the company's crown jewels," he said. "We have to make sure we protect them as best as possible."

Skale really believes in his clients and their products, and he's more than happy to show them off to guests, according to the managing member Mintz Levin's San Diego office, Eddie Rodriguez. Skale even makes it a point to attend Comic Con with his family every year.

"He's very enthusiastic about everything. You never hear Andrew say anything negative or have a bad day. In a lot of ways, he takes on the persona of a lot of his clients."

One of Skale's current clients is the family of Stephen Slesinger – a literary agent who first helped to popularize Winnie the Pooh in the 1930s and '40s.

Slesinger's heirs are currently in a legal battle with The Walt Disney Co. (NYSE: DIS) over who owns the trademark to the legendary, honey-loving bear.

In 1930, Slesinger signed an agreement with author A.A. Milne, obtaining all the rights to Winnie the Pooh outside of Milne's series of children's books. Slesinger then went on to develop board games, record albums, bowls, spoons and other items featuring the increasingly recognizable character.

"He was a visionary," Skale said. "He read the books and saw the possibility this could really be something outside the book."

Other legal matters still pending include a dispute over attorney fee awards, trademark registration and whether Disney is entitled to Winnie the Pooh trademarks in Canada.

"They (the Slesinger family) would like for the Canadian and the U.S. trademark offices to recognize that Disney is not entitled to register trademarks for Winnie the Pooh because that's something Slessinger's entitled to," Skale said.

"There's this sense that Disney would like history to think that Disney created Winnie the Pooh, and Slesinger really wants to make sure that history is properly recorded."

Skale said Slesinger was instrumental in developing the Winnie the Pooh we see today. He was the first person to give Pooh color, including in his trademark red shirt. Skale cited another Milne book – the little known fairy tale "Once Upon a Time" – to show that not all of Milne's books turned into entertainment franchises.

"So arguably, without Slesinger, Winnie the Pooh would just be like 'Once Upon a Time' – a great literary book that a handful of people know about but nowhere near what Pooh is today," Skale said. "I think that very much has a lot to do with Slesinger and what he did from the 1930s to the 1960s."

Skale began representing the Slesinger family in 2006 after his cousin introduced him to members of a magicians' organization that were being pursued for copyright infringement. Later, one of those entertainers was at a birthday party hosted by the Slesinger family. The family happened to mention they were looking for a copyright attorney and the entertainer recommended Skale.

It's been quite an experience for the lifelong Pooh fan – Skale even dressed up in a full sized Winnie the Pooh costume for a staff Halloween party in 2002.

"So then to get involved with what I believe is the most popular character in the world is wonderful," Skale said.

Despite his love affair with Pooh, Skale had not even heard of Slesinger before taking the case. Since then, Skale has gained immense admiration for the visionary literary agent.

When Slesinger got the rights to Pooh, the country was mired in the Great Depression. "This was not the time to be trying new business, entrepreneurial things," Skale said. "Yet he did this."

Before Slessinger, no one had taken a literary character and incorporated it into everyday life – an action that is all too common now.

"Everything I've ever read about him (describes) an amazing visionary," Skale said. "In the Depression, to be thinking now's a great time to be launching a franchise, that takes a lot of entrepreneurship."

Feb. 20, 2014 -- George Chamberlin and Marty Lorenzo, an attorney with Mintz Levin, discuss the small business lending environment in San Diego and the efforts to help veterans transitioning to the civilian workforce.

April 18, 2012 -- George Chamberlin and attorney Eddie Wang Rodriguez, managing member with Mintz Levin, talk about how the legal industry has changed and what up-and-coming attorneys need to know to succeed.