Shaun Alger, CEO of San Diego-based MyOffice, helps companies relocate and revamp their offices for a living. But on the side, his 26-year-old company is helping keep a local nonprofit afloat.

Now in its third year, the March 9 tournament at Lomas Santa Fe Executive Golf Course is expected to raise enough money to let 75 kids ages 4 and up participate in the foundation’s programs this year — from wheelchair basketball to adaptive swimming to rugby and soccer — at different gym facilities throughout the county.

In addition, the donations go toward scholarships for athletes who can’t afford it, travel costs to tournaments, and sports equipment that’s lent to athletes, including wheelchairs.

The foundation, which survives off of in-kind support, fundraisers and corporate donations, lost its funding — and nearly its footing — when the recession hit.

“When they lost their funding, they weren’t going to be able to play,” Alger said. “There’s no quit in these guys. It’s a neat organization, and I never want to see it go away.” 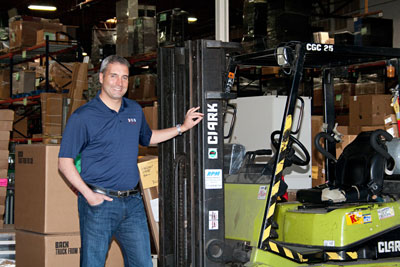 In its first year, the golf tournament raised about $5,000 for the foundation, $13,000 last year and this year is expected to top that. A myriad of local businesses are signed on as sponsors, including Sharp Business Systems, Bird Rock Systems and Innovative Commercial Environments.

“Our year-round programs let them release their energy and help their grades out,” said Dan McCauley, vice president of the foundation. “They can vent frustration and stay physically in shape.”

Many of MyOffice’s partners in the facilities industry, including commercial brokers, are playing in the $100-a-head golf tournament that welcomes 72 players.

While typical high school athletes can compete against other local high schools, the foundation’s athletes need to travel to other parts of the United States to compete with other disabled teams.

One of its athletes commutes three hours to basketball practice every Saturday from Mexicali.

“That’s how important these programs are and how few and far between they are,” said Jonathan Richards, program director of the foundation.

A team of seven players and two coaches is headed to the National Wheelchair Basketball Association’s annual championship in Colorado Springs, Colo., in March.

Locally, there are 250 participants in programs around the year, and in the summer, a weeklong sports camp welcomes about 100 athletes who further their skills.

Before entering the program, kids might be overweight or unsure how to manipulate a wheelchair.

“Now Mom and Dad aren’t pushing their chair,” Richards said. “They are building core strength and arm strength to push their chair in the mall, down the street and at school. Everything they learn in the program transfers directly into their everyday living.”

Word is spreading about the foundation, and golf tournament organizers have seen a spike in direct donations this year.

“My friend who can’t play emailed me and said he was giving 1,000 bucks,” Alger said.

His own firm generously donates 10 percent of its profits to the foundation and Ronald McDonald House every year.

His 102-person company, with additional offices in Orange County and Seattle, has been one of the fastest-growing companies in San Diego for the past few years, and those numbers aren’t slowing down.

When commercial firms grow, downsize or need to reconfigure their workspaces, they give Alger a call to handle all aspects of the change, including desks, phone systems and cabling.

“In the last couple of years, we helped companies downsize or move to better or less expensive space,” he said. “Now we are seeing growth and companies adding employees.”

Its Seattle office opened three years ago, and it’s already scored office work with some big-name clients, including Microsoft (Nasdaq: MSFT), Google (Nasdaq: GOOG), Eddie Bauer, Starbucks (Nasdaq: SBUX) and T-Mobile. As a Seattle native, traveling to Seattle once per quarter enables him to see his family while working on some high-profile office projects.

“It’s a popular product. It’s green, flexible and you can put it up and take it down really quickly,” Alger said.

A local company using the demountable wall system is Intuit (Nasdaq: INTU), which removes the wall to make room for an influx of employees during tax season. Afterward, the wall goes back up.

“You don’t need permitting, and there’s no dust,” Alger said.

He thinks his moving company stands out of the pack because it’s one of the rare operations that handles everything in-house, and its internal processes measure quality on every project.

“People love that. With an average mover, you don’t trust that guy to park your car, much less be in your building at 9 p.m. ... Our guys are well-trained,” Alger said.

Much of its work is with furniture dealers. When dealers order desks, chairs or filing cabinets from manufacturers, MyOffice consolidates, delivers and installs the furniture. The company houses the massive inventory of goods in its warehouses.

The cavernous space attached to its San Diego headquarters resembles a Home Depot: High stacks of packaged pieces of new furniture to cabling sit and wait on soaring shelves until trucks come and transport them to their new homes at designated office locations.

About 15 to 20 live projects are happening per day.

“We help companies get back to business,” Alger said. “We want to make that happen quickly so they can start making money.”

I am very proud of you Shaun, Way to go. love, Aunt Kandy