FrostByte Video Inc.’s goal is to get amateur camera-holding dads off the ski slopes.

“That leads us to do crazy things like skiing backwards on the mountain,” said Korfin, who grew up in upstate New York and is a regular at Mammoth Mountain and various ski spots in Utah. “Cameras get dropped and people ski into things – and you end up not being in any pictures yourself.”

Their concept, FrostByte Video, is a camera system that will be installed at U.S. ski resorts, and will film novices having a lesson with an instructor or semi-pros zipping down a mountain.

“FrostByte is a roller coaster on steroids,” said Korfin, referring to amusement park photos that capture a rider’s squeals.

The cameras will be installed this summer at several resorts in preparation for the start of the next ski season in November.

When skiers pay a $30 fee for the video before their run, they will be able to upload the video by the next morning on Facebook or YouTube to show off their skills — or spills — to their friends and families. 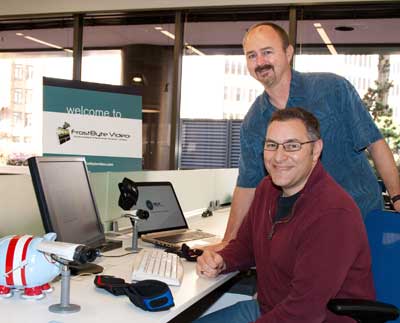 The company declined to disclose which resorts are already on board, but it is in discussions with smaller U.S. resorts, with 125,000 skier visits per season, up to mega-sized U.S. resorts that welcome more than 1 million visits a season.

The company is in the midst of raising a seed round of financing, and is halfway to its goal of $750,000.

“We are looking to find another couple people to bring on the second half of that and will hopefully close the round sooner than later,” said Korfin, declining to identify its lead investor at this point.

Korfin and Sandler are no strangers to the serial entrepreneurial lifestyle, having been involved in various startups since 2000.

Part of the initial funds raised will act as small salaries and go toward their respective San Diego mortgages, they said.

Revenues won’t kick in until December or January, when ski season is in full swing.

“This is not new stuff to us. We expect a year of being pretty lean ourselves. It’s the name of the game to get these things off the ground,” Sandler said.

The company is located in the new EvoNexus technology incubator in downtown San Diego, which houses more than a dozen other startups. Korfin and Sandler previously helped build another company at EvoNexus' La Jolla incubator called Hold-Free Networks, a personal concierge for customer service interactions.

As a result of that connection, the pair found its camera technology for FrostByte. MicroPower Technologies Inc., a surveillance company that graduated from the La Jolla site, develops cameras with low power, solar and wireless capabilities.

Their cameras can withstand the harsh weather conditions and tough terrain characteristic of many ski slopes, making them perfect candidates for FrostByte’s system.

The whole system is automated, so the videos will be uploaded directly to FrostByte's website. The company has the capability to create DVDs for customers, but will wait and see if there's any market demand for it.

FrostByte has completed several beta tests at Schweitzer Mountain in Sandpoint, Idaho and at Cactus Park BMX Park in Lakeside to help fix software bugs and learn where cameras need to be placed to get optimal angles.

“You want to make skiers look good and give a quality shot so they can recognize themselves,” Korfin said.

The company doesn’t plan on limiting its services to certain geographies, and instead, plans to disperse the cameras at resorts across the country.

“We’ve learned from this ski season that with poor snowfall, if we are in the same place and no snow is falling in the region, there’s no business,” Korfin said.

Its blanketed approach for the next four to five years is to be in nearly half, or 150 to 200, of the 450 ski resorts located in the United States.

One to two FrostByte salespeople will work at a kiosk at each resort to collect money and give out armbands that track where skiers are located on the slopes.

Ski resorts will also get a piece of the pie, with a minority revenue cut of each video sold.

Having professional skiers and snowboarders as clients isn’t part of the plan at this point, but filming needs for the Winter X Games and Winter Olympics is on the company’s radar.

“Shaun White can afford to pay whoever he wants whatever he wants, but for the majority of those guys there is not as much money as you’d think,” Korfin said. “The amateur and struggling racer going out to practice on the course don’t have anyone who can film them. There’s a lot of opportunity in the space.”

FrostByte-branded posters and signage at the resorts will advertise the service to skiers, with video footage of previous customers playing near the concession area. In addition, the videos skiers upload of themselves online will serve as instant advertising, since they will feature the FrostByte and resort logos.

“People want to memorialize their vacations,” Korfin said. “We want to find a way to make it safer and more enjoyable, with a repeatable quality product for the long run.”

WOW...this is a fantastic idea. I can’t wait to research which resorts have FrostByte Video so I can plan my next family ski trip!