By RYAN PATRUNO, Special to the Daily Transcript
Friday, March 30, 2012

Ty Hauter's reputation for successfully branding and marketing restaurants and bars in the capricious hospitality industry is attracting a lot of attention. The 25-year restaurateur and entertainment veteran is foreseeing a bright future for downtown San Diego.

“Hopefully in the next 15 to 20 years, San Diego's ballpark district can be a historic site and provide the same atmosphere as the great Wrigleyville and Fenway district,” Hauter said.

The newly rejuvenated East Village and Gaslamp Quarter neighborhoods have prospered over the last eight years, giving a new modern metropolitan look to the once aging downtown area.

“We are on the early end of building a greater community with a stronger foundation,” he said. “In the future, I want people to bring their kids and reminisce about the great memories they had at the ballpark and enjoy the culture of downtown. I want to bring some nostalgia to San Diego.” 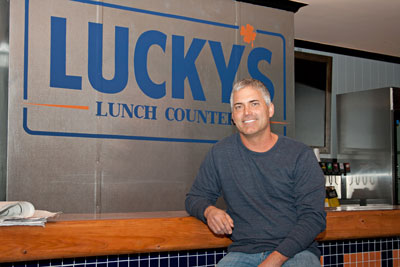 A notable mention is the Wave House in Pacific Beach, which is best known for its boardwalk beach location and the freestanding surfable wave pool.

“Not one of our bars is alike. They each have their own distinctive personality,” Hauter said.

The company is also in the finishing stages of opening Block No. 16 Union & Spirits, which will be located on Seventh Avenue and J Street. The entertainment complex will be an auditorium, providing ample space for concerts and large-scale events. Hauter is also reinventing Jimmy Love's, and will be debuting an aircraft-carrier-themed lounge in the restaurant's lower level this summer.

“We are developing in a couple new areas slowly. But our main focus right now is the ballpark district,” Hauter said.

“My friend was a DJ and needed someone to fill in for him. After he got back, I stayed on as a door guy, bartender, part-time DJ and eventually became manager,” Hauter said. “I got addicted to the business. It was a good way to be around the party and make money. It was a good time.”

After college, he came to San Diego on vacation and stayed after he received a job offer to manage the Elephant Bar and Restaurant in La Jolla.

“I found it easy to outwork people here. I had a strong work ethic from living in the Midwest, and also I found it really hard to go back to the cold weather,” he said.

Shortly after moving here, Hauter opened two small venues in North County. However, within a few years he sold both of them because of a lack of capital and low customer base.

“I overextended myself in late 1988, like many people did in the industry. It was a valuable business lesson, and it made me a stronger businessperson,” Hauter said.

After a short stint designing and building out various properties for other restaurant groups, he decided to jump back into an ownership role.

In 2000, he began investing in several new successful ventures. His strong work ethic and the lessons he learned provided the foundation for future success.

“Tell me it can't be done, and watch me work even harder,” he said.

Hauter still applies this discipline today, as he begins most days at 5:15 a.m. with a 90-minute workout at the gym. Then, it's off to the office, where he spends the majority of his day going over marketing plans, working with event staff and holding management meetings.

“I try my best to go to every venue each day. My days sometimes seem like a continuous lap,” Hauter said. “But don't get me wrong, I enjoy interacting and supporting the staff anyway I can.”

Hauter instills a competitive nature in his staff and pushes them to always strive to do better. His hands-on approach comes from his early experiences in the industry.