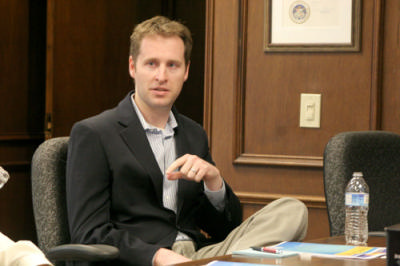 When times get tough, the tough get going.

That sums up the mentality of local entrepreneurs who successfully jumpstarted businesses in a down economy. They shared their tales at The Daily Transcript's Young Influentials executive roundtable April 12 sponsored by the law firm Stradling Yocca Carlson & Rauth PC.

Shaper Studios, a make-your-own surfboard company, launched last May. The concept dates back to the origins of the sport, when surfboard shops didn’t yet exist.

"If you’re a real surfer you might’ve shaped a board before," said Chris Clark, CEO of Shaper Studios. "The problem is there’s nowhere to do it. It’s kind of a closed thing, behind the scenes.”

Customers can use their in-house resources and tools to craft their own boards.

“It offers a community for people to come experience that,” he said.

As a nonprofit that survives off donations, San Diego Foundation knows a thing or two about depending on the community during the recession.

“The foundation has done phenomenally, given the economy,” said Heather Back, associate vice president of marketing. “We have generous donors. During tough times we leveraged relationships we built.”

It's a prime time to dive into a new endeavor and beat existing companies struggling at the top, according to Clark.

“Now’s the time to come in with a new idea and fresh perspective,” Clark said. “I think it will come from people who are young with ambitions.”

Matt Greene started 6 Degrees, a professional business networking group in San Diego, in 2007 as a side project to help drum up business for his financial job.

“I had no intention of it becoming a business itself,” said Greene, CEO.

In the last year, however, a surge of advertising dollars came pouring in as membership doubled.

“I think a lot of organizations are doing quite well,” Greene said. “Some of those dollars were tied up for a couple years and companies are now going back to the market.”

“A lot of business owners I work with have persevered through the recession and buckled down,” said Sean Puckett, first vice president at Regents Bank. “I see a lot of positive things happening to people with the right attitudes.”

Teresa Siles, vice president and director of social media at Nuffer, Smith, Tucker, said her company is figuring out which types of new clients to take on now that conditions are improving.

“The idea of looking for clients that are passionate about what they are doing inspires us," she said.

Equity financing continues to be difficult to raise, however, according to Michael Brown, shareholder at Stradling Yocca.

“With funding still being difficult to obtain, I’m seeing a lot of companies be acquired than I am seeing new companies being started," Brown said. “At some point, that will be an issue if financing doesn’t become more accessible."

Still, companies with the right passion and entrepreneurial spirit are locking down money. FITzee Foods, a healthy meal service started by fitness buff Michelle Weinstein, got a full-blown rebranding makeover a year ago with $500,000 in funds.

“I love what we have to offer to people," Weinstein said. "You only have one body and you can’t trade it in like you do with cars. You can use food as poison or medicine, and we sell it as medicine.”

Brad Chisum, CEO of Lumedyne Technologies Inc., is commercializing high-performance sensor technology that was invented inside the walls of his former employer, Space and Naval Warfare Systems Center, San Diego.

“I went from the most secure job in the world, where you were only fired if you committed a crime, to a startup lifestyle,” he said.

That meant giving up a regular paycheck for no salary for three years while he licensed the technology and built Lumedyne.

The sacrifice has paid off and Chisum’s company is on an enviable hockey stick growth curve, expecting to exceed $20 million next year. It expects to have over 40 employees by the end of the year and more than double to up to 100 by the end of 2013.

“The biggest challenge is finding the right people,” he said, adding that the company has had to import about half of its staff from out of town. “The talent pool we need doesn’t exist here.”

San Diego can be great or a bad place to relocate, depending on where employees are coming from.

In 2008, the time it took from identifying a position to filling it was two months.

“Last year it took an average of six months,” Chisum said. “I don’t think that time frame will go down.”

Greene's four-person company is expected to grow to 10 people by the end of the year. Trying to nail down the right employees at its San Diego headquarters is tough – especially as the company expands out of state.

Shaper Studios also is in expansion mode and will soon open its second store in Newport Beach.

While Orange County is a mecca for surfing, it surprisingly wasn’t where the company wanted to go next.

“It’s so saturated. People have their loyalties and there’s this whole image of sponsorship,” Clark said. “All this stuff that doesn’t go with our business model.”

A preferable market the company hopes to land next year is Virginia Beach, where surfers are extremely dedicated to the sport because they have to wait for the right time. That culture also exists in San Francisco.

“Here everyone is so jaded. You can go out any day of the year and surf all you want, so making a board isn’t a number-one priority,” Clark said. “Whereas in San Fran you are lucky to maybe get 100 days a year you can surf. They are looking for any other way to experience surfing and our business fits right into that.”

Related article: How to strengthen the value of your company and prepare for a successful exit

April 12, 2012 -- George Chamberlin sits down with Michelle Weinstein, president and CEO of FITzee Foods, to discuss her company and what drives her to make it succeed.