Gamer Grub takes a bite out of snack industry

The simple grievance of greasy fingers one gets when eating while gaming was enough motivation for Keith Mullin to start a company whose mission was to find the solution.

Mullin launched San Diego-based snack company Gamer Grub in 2008, drawing on his experience in the consumer development side of the computer industry.

“I figured this was a wide niche in a very large and incredibly fast-growing market,” he said.

Gamer Grub is a snack with a “tear and tilt” tagline, helping players to multi-task — eat and game — without the distraction of messy mitts or crumbs on a keyboard. Flavors include S’Mores, PB&J, Pizza and BBQ. The snacks also come packed with vitamins and neurotransmitters, intended to give gamers a competitive edge.

He got the ball rolling on the idea by attending conventions like the Fancy Food Show, and hooked up with consultants in food manufacturing. 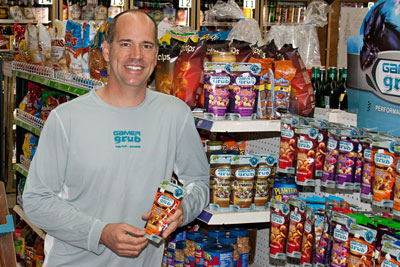 When the website went live in late 2008, Gamer Grub became the official snack supplier of the World Cyber Games — catapulting the brand into the international snack stratosphere.

“The site got 2 million hits in one day. We had this massive spike in demand,” he said.

Investors got a strong whiff of his snack-food company in February, when Mullin’s startup story was splashed on the front page of The Wall Street Journal — a dream for any company hunting for cash.

Sure enough, that article resulted in generating 39 contacts in the investment community. One investor bit (MIKAT Financial and related partners), and Gamer Grub closed on $100,000 in seed funding April 12.

In the early days, Mullin heavily surveyed the gaming community to perfect packaging and flavors. The company’s sweet spot is the 18- to 25-year-old male market, he found.

“We sponsored him just like Gatorade sponsors a sports star,” Mullin said.

The company is exploring a partnership of its own with a large energy drink company.

“They are looking to partner their energy drink with our brand,” he said. “For them it’s a strategy, looking for consumables their target demographic is already in line with.”

While he wouldn’t disclose the drink company, he calls the potential deal “our most exciting promotion this year.”

The company exploded on the retail front in November when Gamer Grub expanded into snack sections of Best Buy (NYSE: BBY) stores across the United States.

Best Buy, reacting to a competitive consumer electronics marketplace, recently announced plans to shutter 50 stores by the end of the year.

“They are a powerful brand,” Mullin said. “They will have to figure out how to evolve with current realities of digital downloads and gaming. They’ve got a lot of carpet to vacuum.”

Meanwhile, Gamer Grub has no plans to slow down. Last year, the company sold 300,000 units, and this year that number could potentially quadruple, he said.

“Things are moving quickly, and more retailers are coming into play,” he said.

While it would make sense for a snacks giant to scoop up a company that’s gaining ground like Gamer Grub, an acquisition isn’t on Mullin’s mind at the moment.

“We need to get to a certain level before we’d consider it,” he said. “The escalation of value going forward is pretty impressive.”

The tough legwork, like research and development, and stocking the product on shelves, is done, but the company still needs time to mature in the marketplace.

Not all feedback has been positive. A new flavor in testing mode, a honey mustard wasabi, didn’t get glowing reviews in the Middle America market.

“They didn’t understand the flavor,” he said. “It’s hard to start a new company and start branding when people don’t like a specific flavor.”

Wasabi might do well in metro areas, however, and he said the sweet flavor with a “hot finish” could hit stores on the coast.

Despite little marketing dollars, the brand has found fans in many countries.

It’s being shipped to places like Canada, Sweden, Finland and the United Kingdom, and interest is growing in Central America. The company recently inked an agreement with a distributor in China.

He might drink a little less in coming months as he adds interns and part-time employees.

He’s also in need of physical office space. Mullin was contacted by EvoNexus, a local tech incubator program. Startups like his can use the downtown office space for free. Companies get instant access to investors and mentors tied to the program, eventually graduating and moving out.

“The goal is to grow the company as fast as I can,” he said.

He got the company started in 2008 with two Small Business Administration loans, and the company has raised $500,000 since.

A chunk of the most recent $100,000 round will be allocated for much-needed marketing dollars, spent on trade shows and online advertising.

The company will make several appearances at shows this year, including the Sweets & Snacks Expo in Chicago in May and the Electronic Entertainment Expo in Los Angeles in June.

Gamer Grub is a natural fit at Comic-Con in San Diego — a mecca for obsessed gamers — and the company is in talks to partner with Sony PlayStation at this year’s annual event in July as a perfect pairing. Last year, Gamer Grub teamed up to throw an event with Playboy at the convention.

Mullin is thankful for a strong board made up of snack industry veterans, including former Nabisco, Red Bull and Kettle potato chips executives.

The board advises Mullin on initiatives, like whether to splash a big gaming star on packaging.

“They have experience on the right and wrong ways to do that,” he said. “They say, ‘Don’t go after shiny things.’ As an entrepreneur, you want to please everyone and do as many initiatives as you can.”

He’s seen snack companies pop up and fall flat on their faces after spending millions of marketing dollars when they don’t even have the same level of traction Gamer Grub has.

“The challenge for me is to hone in on a tight focus,” he said. “If I’m going to go do something, it has to be on target instead of trying to throw a bunch of stuff at the wall.”

It's unfortunate that the article doesn't credit most of his wins coming as a result of being a member of CEO Space - San Diego. Dave Phillipson, CP CEO Space - San Diego http://bit.ly/l4xEVB The World's Largest, Oldest & Most Successful Organization for CEOs, Entrepreneurs & Visionary Investors http://www.CEOspaceSDcounty.com Dave@CEOspaceSDcounty.com P.S.  Those that know me, understand that there's not much that excites me more than helping a fellow entrepreneur grow their business!  I am passionate about sharing my resources, knowledge, and elite connections in order to build businesses cooperatively. I do this by receiving referrals from people like you.  Who do you know that is a business owner who wishes to grow with strength & velocity?