Xpenser expands in the market

By TIERNEY PLUMB, The Daily Transcript
Thursday, May 31, 2012

Filling out a tedious expense sheet after a wine-infused steak dinner spent wooing a business client is not on the top of most anyone's to-do list.

But with San Diego-based Xpenser, business people can submit the report before dessert.

Use any device to snap a picture of the receipt and the app automatically uploads it into an expense report.

Xpenser automatically routes reports for meals, mileage or time to the appropriate person, sending an email notice with a PDF to managers and a link for approval.

No more stockpiling receipts and plugging numbers into a spreadsheet or ugly interface. No more simultaneous sighs from co-workers on the last day of the month as someone reminds the office that expenses are due.

That was Parand Darugar's Achilles' heel while he was director of architecture at Yahoo Inc.'s (Nasdaq: YHOO) ad group from 2005 to 2008, commuting between San Diego, Los Angeles and the San Francisco Bay Area -- and building up expenses in the process.

“I was traveling constantly four days a week. I hated doing expense reports,” he said. “I didn’t do them and would wait for a very long time.”

He’d put off plugging in the billable coffees and taxi rides, sometimes forgetting to record the reimbursements altogether. Pretty soon he was six months and $30,000 behind on submitting reports.

His wife, who’s ironically a financial planner, staged an intervention and said his procrastinating meant he was essentially giving his company an interest-free loan.

So, he beat the system by creating a new one that made tracking expenses as easy as taking a picture or firing off an email.

He set up a system where a text message would be received, parsed, and entered into a database. 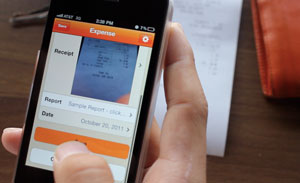 Take a photo of a receipt using any mobile device and the app automatically uploads it into an expense report.

When he took the Amtrak train to Los Angeles, for example, he’d take an $18 taxi ride to the office and text message Xpenser. He then added an email function to take pictures of receipts.

“People would see me having lunch and taking a picture of my receipt and ask what I was doing. They wanted an account,” he said. “Soon more and more people wanted accounts.”

Capabilities have grown so that users can type or talk into pretty much any device to capture time, expenses and receipts on the go, including iPhone, Android, BlackBerry and Windows Mobile. Send text messages, emails or even leave a voicemail, which are all translated into expense submissions.

That means users can manage, search, print and submit expenses all in one unified place. Credit card transactions are automatically imported, categorized, and placed into an expense report.

Its core customer base is companies that want to use Xpenser as a full expense management solution. Three years ago he started to build out the administrative and finance side.

“Once we did that it really started to take off. We are doubling in revenue every five months. It may be faster the next five months,” he said.

The plan, he said, is to make individual accounts free and charge for business accounts. The service is popular among companies with employees who bill many hours while out in the field.

Workplace Options, a Raleigh, N.C.-based provider of work-life employee benefits, sends many of its workers on travel to do training.

The president was using Xpenser for himself and liked it so much he inquired about his entire company using the service.

That was during the early days of Xpenser, so Darugar's number wasn’t yet listed on his website. The president did some digging and found it through the record of Darugar's domain name. Now Workplace Options is Xpenser's largest live account, with 1,000 employees.

Another user is BSquare, a Bellevue, Wash.-based research and development firm for mobile devices.

Xpenser, a self-funded startup with four full-time employees, is not in fundraising mode at the moment.

“Our revenue is growing fairly rapidly. We are feeling good about where we are and not looking to raise at the moment,” Darugar said, adding that the firm has positive cash flow.

In about six months to a year, he plans to go to the market to look for money.

Most of Xpenser's paying users are in the United States, but it’s catching on in Europe, particularly in England, and Japan.

The main competitor is Concur, an online travel and expense management system.

Founded in 1993, Redmond, Wash.-based Concur has massive-sized companies as clients, some of which are Fortune 500 companies.

"We have a much easier way to do expense reports than that," claimed Darugar, who used Concur during his expense report days at Yahoo. “We are working our way up to larger companies."