By PADMA NAGAPPAN, Special to The Daily Transcript
Wednesday, June 13, 2012

Growing up in San Diego with a stepfather who was a general contractor, Bob Noble remembers reading The Daily Transcript at a young age and learning about construction, even before he understood what the word “architect” meant. When he did become an architect, stepping into construction and design-build projects was a natural transition.

A serial entrepreneur, Noble left architecture firm Tucker Sadler where he was CEO in 2006 to form two innovative companies simultaneously — Envision Solar, famous for its aesthetically appealing solar “trees” that shade cars while charging them; and Noble Environmental Technologies, out of which emerged eCor Global, which makes eco-friendly panels out of recycled materials that can be adapted for a variety of uses.

He remains the chairman of Envision, but is now fully focused on eCor, and recently set up a factory in Barrio Logan to manufacture the panels.

Noble's idea was to develop a versatile, three-dimensional engineered molded fiber panel product that can be made from readily available, under utilized, low-cost materials drawn from urban sources — such as used paper and cardboard, and agriculture and forest sources. 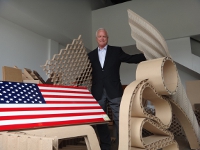 The 10,0000-square-foot Barrio Logan facility taps paper, old newsprint and cardboard waste generated by the City of San Diego and other local sources.

"We love this urban model because cities need renovation and brown field redevelopment, and that's where the work force is that also need the jobs," Noble said.

The panels are beginning to gain traction in the market among interior designers, architects and industrial designers. Google Inc. uses them in its walls, ceilings and architectural elements found in its offices, and Noble said high-profile customers like the search firm come through designers and architects who are the actual direct clients for eCor.

"We have a lot of friends who are always talking about us, which is really nice. We've had some media exposure. We’re becoming known among designers and architects. We’ve been to trade shows," said Noble, explaining how his company has generated so much buzz so quickly.

Beauty and functionality are inseparable parts of the company's DNA, he said, which contributes part of its appeal.

"An important aspect of the appeal is having something customers have been looking for but haven't found yet, or did not know they wanted it,” Noble said. “But when they see it, they must have it.”

eCor products will compete in the market as a niche product rather than a mass-manufactured commodity panel item. Noble secured three rounds of funding — mostly from high-net worth individuals familiar with the furniture and materials industry — and is on track to ramp up production and go from seven to about 30 employees in the next year or so.

The building and fabrication industry is not startup friendly, yet he has launched two companies and managed the choppy waters of the Great Recession.

Noble said coming by venture capital funding and other traditional sources of finance are tough, because this is not like the information technology or high-tech industries, and is new stomping grounds for most investors.

"There is so much room for innovation and better products in the building products market, but the founder must take a very long view. Whereas a tech entrepreneur can achieve significant funding, millions in sales and liquidity for investors within a few years of launch, it takes at least double the time in the building industry in the best of cases," Noble said. "Five, possibly 10 to 15 years may be needed to get real traction in the building materials market."

He offered up some advice for other entrepreneurs in the industry: Use “forensic analysis” to sift market factors and focus on what's doable, instead of impractical attempts to go after markets or funding that won't happen.

“Failure only happens if you surrender,” he said. “Often you're really close to succeeding when you quit.