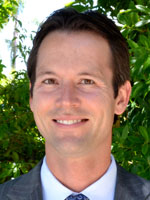 During a recent press conference, mayoral hopeful Carl DeMaio assembled four members of the next City Council as a display of solidarity to uphold the voter-approved pension reform initiative Proposition B.

The group included Councilman-elect Mark Kersey, a former president of the San Diego Young Republicans who this spring had the luxury of running unopposed to replace DeMaio in the conservative 5th District.

And that’s why Kersey, despite appearing at a press conference that in many ways antagonized Proposition B opponents, is the rare politician walking into office without any enemies.

Without having to win an election, Kersey was able to maintain positive relationships with those who might have otherwise grown into political adversaries.

For an example of how he’s managed to maintain that status, look no further than his remarks at that August press conference.

“I see some of our friends out here from fire and from police,” he said, nodding to union representatives who had gathered to watch the event, “and what I would like to do — and I think what all of us would like to do — is work with you on how we structure [Proposition B] in a fashion where, for example, if we need to offer retention bonuses for our police officers, so they don’t go to the sheriff's department or Orange County or places like that, that we can do so in a non-pensionable way. I believe we want to work with you guys on that, and I look forward to those discussions.”

By comparison, DeMaio said the coalition he assembled meant he didn’t need to “ask for union permission” to implement the will of the voters. Sitting Councilwoman Lorie Zapf said the mayoral election was a choice between a candidate who would report to voters and “one who reports to the unions.”

Kersey, then, will begin take his first term in elected office with open lines of communication to many union leaders.

“No one was out there making sure I didn’t get this job,” he said during an interview, drinking a Knob Creek on the rocks at the University Club, overlooking downtown. “I didn’t have to have a particular bias against a group or anyone else, because they weren’t clearly targeting me. I think inherently, if you’re in a position where people are attacking you, you’re not going to be as friendly with them. And I don’t have any of that.”

If labor leaders are pessimistic about his hopeful outlook, they’re at least exchanging public niceties for now.

President of the San Diego Police Officers Association Brian Marvel, a union representative who one might expect to oppose a candidate whose political motivations include outsourcing city services to reduce the size and cost of government, said he met with Kersey a few times before the election and again after it.

He says he walked away with a lot of hope that the Rancho Bernardo resident will at least remain willing to sit down and talk.

“We’re not expecting a district five candidate to be all over our ideas,” Marvel said. “More business produces better revenues, which produces more services that’ll draw in more people; we’re in agreement on all that. It’s just a question on compensation and other things that we’d like to see. They are valid points of disagreement, and I just hope that doesn’t turn into demagoguery.”

And Evan McLaughlin, policy director for the San Diego-Imperial Counties Labor Council, likewise said the council was optimistic that it would be able to have open dialogue with Kersey and once he takes his seat on the council.

Two of Kersey’s preferred means of reaching what he sees as a right-sized city government, however, are performance-based pay and managed competition. Both are policies opposed by labor and favored heavily by DeMaio, but even while promoting those, Kersey adopts a conciliatory tone.

“The first thing is, you’re going to have to work with employee leadership,” he said. “I don’t think it’s a good idea to impose conditions. I’ll talk to any of those people. If you show people you’re willing to listen, that you might not agree but you can meet for a drink and do whatever, you recognize you can work together.”

Once in office, however, pleasant rhetoric and a lack of campaign wounds won’t go as far as it does now. City employees and the leaders who represent them aren’t likely to resent lost jobs any less if the man who cast the decisive vote has a history of saying nice things to them.

And, undeniably, Kersey will cast plenty of votes that labor won’t like, as his appearance at DeMaio’s August press conference attests.

The sharp-dressed entrepreneur-turned-politician Kersey is in many ways the embodiment of a certain type of Republican: a Reagan devotee in the mold of a grown-up Alex P. Keaton.

He came to San Diego 11 years ago after the Chicago-based dot-com he was working for imploded. The central Ohio native moved to La Jolla, taking a job to conduct broadband research for a tech company. When the company was acquired by a bigger firm, he got fed up with a botched integration, and decided to start his own business, Kersey Stragies. It’s a research and consulting firm for the telecommunications industry and during his time running it he’s established himself as an expert in the field, often appearing on cable news programs to discuss relevant topics.

While living here he’s also weaved himself into the fabric of the local conservative establishment. In 2008 he became the president of the local Young Republicans chapter (a position for which he also ran unopposed). He’s also served on the board of the Lincoln Club of San Diego.

And given that background — entrepreneur, self-described Reaganite, pro business lobbyist — many of his initiatives upon taking office won’t come as a surprise.

He says he wants the city to do a few things well, instead of many things poorly. The easiest function for the city to outsource, he said, is operating golf courses.

“I’ve never meet a single person who doesn’t work at Torrey Pines who thinks the city should be doing that,” he said. Outsourcing operation of the airport and cemeteries are also low-hanging fruit, he said, though he doesn’t want the city to sell those properties.

Standard outsourcing — as the city recently did with its IT contracts — is the best method of eliminating those government functions, he said. With other services and departments, the city needs to more aggressively implement managed competition.

The city so far is saving roughly $8 million a year through new contracts awarded in competitive bidding, although each of those services has been won by city employees. With a half dozen more services ready to make their way through the bidding process, Kersey would like to see that annual savings figure pass $20 million and thinks it could reach up to $30 million. He’s not concerned that city employees keep winning each competition.

“The ultimate goal is to save every nickel of efficiency we can out of every tax dollar, so if we’re saving the city money, then that’s OK,” he said.

Likewise, performance-based pay he sees as a way to squeeze efficiency out of the city’s $1.1 billion budget.

“The structures in place are designed for the employees who would probably otherwise be gotten rid of,” he said. “Let’s face it: If you’re a good employee and you’re out there doing your job and you’re on the ball, you don’t need those protections. You’re going to be fine.”

“It’s really about protecting the mediocre worker. And I suppose if you get enough of those people together then that preserves the status quo. You’d find if you went in and talked to city employees, there are more good employees than bad employees, and we should be recognizing those people.”

Kersey’s legislative priorities present plenty of room for disagreement with labor, even if that disagreement occurs over a drink after representatives walked through his open door.

That’s why he says it’s important to remember that unions are one of many stakeholders in the city, and keeping a relationship with them is no different than doing so in the private sector.

“When it’s contract time, just like at AT&T or General Electric, you’re going to have tough discussions,” he said. “If they walk off the job or do something else that you’d rather they not do, you hope those tactics are temporary, and once you get past that, you get back to the business you’re trying to run.”

Outside of those issues, the councilman-to-be says he’ll devote a lot of attention to economic development.

The City Council can’t control the tax environment imposed by Sacramento, he said, but it can mitigate those effects through small factors on the local level. Specifically he mentioned land use and permit issuance as areas in which he sees room for improvement.

“You talk to (high-tech companies) and one of their complaints is that there’s not enough housing near them,” he said. “They’re trying to attract young workers, and there’s not a lot of cool, trendy, walkable communities like a North Park or like downtown’s becoming. There are a lot of single families and retired people, but if you’re trying to hire people straight out of college it might not work as well.”

He thinks the city could also do a better job of marketing its proximity to the Baja Peninsula, or branding itself as an opportunity for Asian companies to open a West Coast hub.

Kersey’s got a few more months before he takes office. During that time, he’ll learn whether he’s serving under a mayor who supported his candidacy and whom he shares many legislative priorities. He’ll also learn whether he’s a member of a majority or minority, depending on who wins the council race in the first district.

Either way, he’ll take office looking to implement or expand policies with a vocal and established opposition.