In the past 10 to 15 years, the dining and craft beer scenes in San Diego have exploded, marking the city as a new culinary destination.

The surge in San Diego's culinary culture has helped create a vibrant -- and profitable -- niche for Chefs Press Inc.

Publisher Amy Stirnkorb and Executive Vice President Michael Pawlenty started the small publishing company in 2008. Both come from the worlds of publishing, Stirnkorb with experience as a graphic designer and editor, and Pawlenty in production and photography. In 2011, they brought on Bruce Glassman as president. Glassman has extensive experience in book publishing, and is also a trained chef.

“We all do different things to make the company work so well together. We all have our strengths, and that's what makes us such a great team,” Stirnkorb said. “We’re very excited that we can be a profitable company doing what we love to do.”

It views the publishing of each book as a business venture. The company creates a true partnership with the chefs, restaurateurs and brewers that help create the books.

“We're able to take our book creation expertise to people who have a lot of great content but have no idea how to turn it into a book,” Glassman said. “What we’re able to do is partner with some of these folks, and turn the content they have into a really beautiful finished project.” 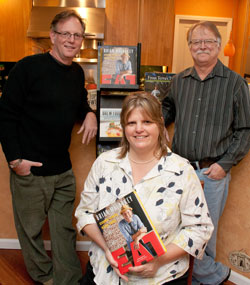 While Chefs Press handles the development, design, production, printing and marketing of a title, it does ask publishing partners for an upfront commitment to purchase a minimum number of copies upon publication and within the first 12 months of the book's life. The minimum commitment depends on the book’s size, dimensions, print run, potential marketability and other factors.

Putting the books directly into the hands of partners allows them to sell the titles directly to their core potential customers, both online and at their various restaurant and retail locations.

“As the electronic age has grown, everyone has the ability to reach their own fans — their own customers, people who know them and love them — much more directly,” Glassman said. “They're much more empowered to not only sell the book that they’ve helped us create, but they also profit from it a lot more.”

In some cases, potential partners approach the small press. Other times, Chefs Press seeks out people to work with. Stirnkorb has “been known to stalk people,” Glassman quipped.

Unlike most big publishing houses, Chefs Press offers authors and their books a lot of personal attention.

“Our authors are involved in all facets of the book. Our goal is to have them be proud of the product we're doing with them,” Stirnkorb said.

Malarkey hit it big on the third season of reality TV show “Top Chef.” The award-winning chef now stars as a judge in the new ABC cooking competition show, “The Taste.” And his fabric-named restaurants — Searsucker, Burlap, Herringbone, Gabardine and Gingham — have received acclaim from diners and critics alike.

Malarkey's book, “Come Early, Stay Late,” released by Chefs Press in November, won Gourmand International’s award in the Best Entertaining Cookbook category for the United States. It now goes up against international cookbooks for the world title; the winner will be chosen in February.

Each Chefs Press book is full of Pawlenty's beautiful color photos. The press understands that a big part of the cookbook experience — and indeed the food experience in general — is visual. It doesn’t skimp when it comes to the look and feel of the books, which are printed on thick, handsome paper.

“Not every decision that we make is strictly bottom line, the way a lot of bigger publishers are,” Glassman said. “So if we want to do extra beautiful printed-end papers, we'll pay the extra money to do that.”

“The nice thing is, while we're very small, the quality of books we’re producing is top notch,” Pawlenty added.

Chefs Press has a national distribution network that includes Barnes & Noble, Amazon and major wholesalers. It also has access to independent bookstores and warehouse clubs, as well as more unconventional channels such as retail food outlets and specialty food, wine and agricultural associations.

Print runs have varied from 1,500 to 7,500 and everything in between for a first printing. Of course, once in print, a big part of a title's success comes from how well it’s marketed.

Luckily, when it comes to food and beer, it's not hard to put together fun and appetizing promotional events that people will want to attend, Glassman said.

High on the publisher's agenda this year is producing e-books. While it has plans to release an e-book version of “San Diego’s Top Brewers” along with other titles, the process is more complex than, say, turning a Tom Clancy novel into a Kindle version, Stirnkorb said.

“Our books are very complicated in their design,” she said. “We really want our e-books to look like our print books — the beautiful photography, how the recipes are laid out, how the tips are nested within them. So what we've been grappling with is settling on the format and finding the right outlet for getting the e-books produced.”

In 2013, Chefs Press will expand its focus with a book on lifestyle, decorating and entertaining featuring San Diego artists and chefs, and the release of its first non-localized book, “Colorado's Top Brewers.”

It's also in talks with chefs in Washington, D.C., and New York, and considering a book on the Portland beer scene as well as a Los Angeles-based vegan cookbook. As Chefs Press grows, its principals are working toward publishing books with more national and even international appeal.

“We all want to make the company grow as fast as we can, but still produce great books,” Glassman said.