For the past two years, Sloan Kamenstein has been working to franchise his ice cream shops, which have been described by some as a mix of FAO Schwarz and Willy Wonka’s chocolate factory.

“We have wanted to branch out into different markets and franchising makes the most sense,” said Kamenstein, owner and founder of Sloan’s Ice Cream. “The quickest way to expand is to franchise our business.”

Based in Palm Beach, Fla., Sloan's has been in existence since 1999. Kamenstein will make San Diego the first spot for an ice cream parlor franchise.

“California in general, and especifically Southern California, is an ideal place for our clientele,” Kamenstein said. “There are lifestyle centers, a great population and incredible weather that is 10 times better than Florida.”

Kamenstein is teaming up with Larry Greenberg, who has seven Edible Arrangements franchise locations and one shipping center in San Diego and Riverside counties.

“We wanted to partner up with someone who knows more about San Diego than we do, and Larry has this experience,” Kamenstein said. 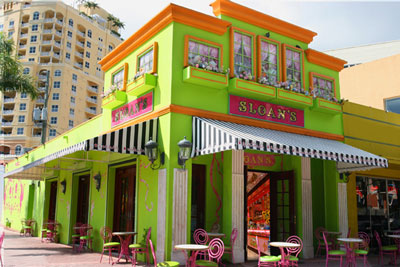 “I had read about Sloan’s in QSR, a hospitality trade publication, and after doing my research on the company I flew out to Palm Beach to check out the place,” Greenberg said. “When I first stepped inside a Sloan’s store, it was love at first sight. The creativity, energy and brilliant presentation of Sloan’s lured me in, and the ice cream is beyond incredible.”

Greenberg explained that he had been looking to venture into a new franchise and be hands-on again.

“My Edible Arrangements are self-sufficient now that I don’t need to be involved on a day-to-day basis,” Greenberg said, adding that he was impressed by the high rating given by Zagat, a restaurant guide and survey publication, to Sloan’s.

“I would like to have three Sloan’s [locations] in the next 18 months and at least open one in San Diego this year,” Greenberg said.

Neither Greenberg nor Kamenstein would say what the entire franchise contract will cost, but Greenberg did say it cost $800,000 to produce a 2,000-square-foot Sloan’s Ice Cream shop.

Greenberg said he wants to put Sloan’s in high-end “lifestyle centers” like Westfield Fashion Valley mall. He said he is working to find a place to establish Sloan’s, but does not have any lease agreements at this time. 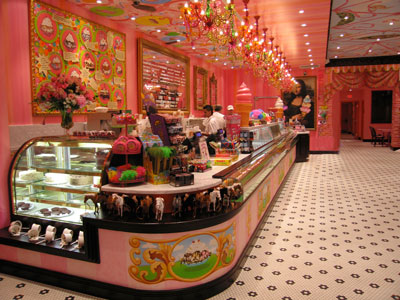 Sloan Kamenstein has been working for two years to franchise his ice cream shops, which have been described by some as a mix of FAO Schwarz and Willy Wonka’s chocolate factory. Photo courtesy of Sloan's Ice Cream

Construction will involve installing custom everything: wallpaper, crown molding, ceiling art work, paintings, flooring and counter tops. All decorations, equipment and furniture will be made offsite and installed by a company contracted by Kamenstein. Decorations combine over-the-top aesthetics including bold pink and neon green walls.

The storefronts sell not only Sloan’s specialty homemade innovative ice cream flavors, but also all types of candy, cookies, cakes, pies and toys.

Greenberg said merchandise and equipment will be shipped on an as-needed basis from a supplier that Kamenstein has selected. No ice cream will be made onsite.

Greenberg said those hired to work at Sloan’s will be heavily focused on great customer service, paid more than minimum wage and reflect the fun and exciting nature of the Sloan’s culture.

“When you walk into Sloan’s Ice Cream, we want you to feel like the good old days where the customer is always right,” Greenberg said, adding that he used to own and run the Village Ice Cream shop in Seaport Village.

Kamenstein plans to expand Sloan’s nationwide and add 200 franchise units in the next five to seven years.