In a world where sensor technology, iPads and working out are all the rage, one new fitness company has managed to effectively combine all three.

Since Fitwall debuted June 1 in La Jolla, a bevy of trophy wives, athletes and even kids have climbed on board the new trend.

“The wall doesn’t move. There’s no motor. You go on the wall and you are the machine and determine how fast slow, hard or easy you want to train,” said Yoana Teran, market manager for the San Diego region.

That simple yet effective mantra is evident in each 40-minute class, too.

“It’s not how hard you train, not how long you train, but it’s about how smart you train,” she said.

“There is no workout that gives you strength, cardio and flexibility in 40 minutes,” said CEO Josh Weinstein. 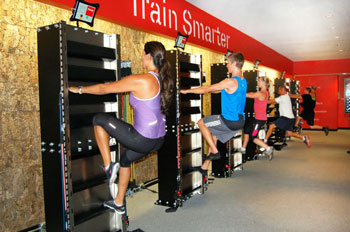 Fitwall's "less is more" approach means you won't find rows of machines and weights that are standard in mammoth-sized gyms.

Like its motto “train smarter,” the company wants to run the business in a smarter way.

“We are a cashless business. The reason is to scale nicely; we don’t want to be in a legacy environment with a big front desk," he said.

Instead, technology is at the heart of the operation — in both the back end and consumer-facing side.

Stroll into the studio and grab a sensor from the “peanut gallery.” Snap it onto a strap you're wearing around your torso, head to your assigned Fitwall and you're ready to squat, jump, stretch and climb the wall as the motivating vocals of Justin Timberlake and Jay-Z fill the air.

Glance above your wall and you'll see a mounted iPad that displays your name and a color-coded system that pulls data from your sensor to reveal the level of exertion at any given time, ranging from blue to red.

“When you get to red, it doesn’t mean it’s wrong, it means you are pushing yourself hard,” Teran said.

At the end of each class, sweaty climbers are rewarded with a cold towel and coconut water shot. Then they gather around a large board to visually compare their "report card" to others in the class.

“Numbers don’t lie,” Weinstein said. “We let them know where they are at today, after this workout, and then a month from now.”

The heart-rate information gathered from sensors is sent wirelessly to the iPad, which transmits the data to servers hosted by Amazon.

The iPads collect about 100,000 data points per session.

“Every second we receive a measurement from each one of the walls," said Joe Bergeron, chief operating officer and chief technology officer of Fitwall.

Servers get their own workout out of Fitwall; they crunch and store historical data into a customized e-file for participants to view over time, taking into account the users' age, weight, sex and fitness level.

"We end up with tons and tons of data. For a single studio, that is kind of amazing: that we now have sports metrics people who are knocking on our doors," said Bergeron, who used to help Whole Foods with data collection efforts to find out how products are selling.

Aside from spare use in high-end personal training gyms and Olympic Training Centers across the United States, the idea is novel.

"You have personal training-quality instruction or better in a fun group environment that is still powerful and customized. The coach has the ability to see how people are doing in real time," he said.

Participants can compete with a friend taking the same class across the room, and soon, across the country.

The company's extremely aggressive expansion plan includes opening up 100 studios in the next four years in Southern California, the Denver and Boulder areas and New York.

Each market will be bulked up with clusters of studios.

“We want to build a community of people engaging and getting benefits from Fitwall,” he said.

Fitwall will pop up next in Solana Beach, Hillcrest and UTC.

La Jolla was chosen as the first test site because it's packed with fitness fanatics and other workout options.

“We are confident in what we are offering and why,” he said.

The inventor’s background is in developing fitness equipment and innovations that resulted in better barbells.

“With Fitwall he was looking at what could be possible in a small space to get someone a great workout," Bergeron said. "We thought it would be great to open it up as a studio rather than sell it individually.”

The class isn't all on the wall. A removable bar can be placed on the wall for pull-ups and arm work with resistance bands.

“Forty minutes on a wall is a lot for your brain. We want to keep you on the floor doing different movements,” Teran said. “As soon as you have two hands and two feet on the wall your brain doesn’t know if you are 1 foot or 100 feet from the ground.”

“You can see in front of your eyes how you are doing,” Teran said.

Quickest results come when taking three to four classes a week, she said. If paired with heavy training on the side, she suggests twice a week max. That kind of workout plan doesn't come cheap, however.

Fitwall claims to enhance the performance of other activities people do.

“If you love to cycle, Fitwall will make you a better cyclist,” Weinstein said.

Teran, with a heavy Venezuelan accent and physical therapy degree, was a longtime expert in the Kettlebell fitness industry before she was lured to the wall.

“When I put two feet and hands in wall I said this is just incredible. You develop awareness of body so much connection between you and wall, when you go on the floor it’s a piece of cake,” she said.

She was also attracted to the idea of bringing her 5-year-old tyke to class.

“People are super busy and working all the time and spending little time with family and it’s sad. We encourage parents to come here with kids and work together,” she said.

Fitwall has two kids’ classes each week, suggested for those 12 and up, but there are exceptions depending on maturity levels.

“It was great to be able to work out and have [my daughter] there at the same time,” she said.

There are also “mommy and me” classes that let moms bring their babies in strollers and park them next to the wall.

Teran's own “baby” is parked outside the studio: a Fitwall-branded trailer that contains four walls. She takes the studio-on-wheels out to the community three to four times a week.

“I can take it anywhere people want it. To the farmers market, golf tournament, to the beach and park,” she said.

Financed by a group of private investors, the company will raise additional capital for expansion in the fall. The company is working hard to brand the concept as not just a workout, but a new way to think about fitness.

“All you need is your body weight, your mind and our technology. Coaches are there to get you excited and data is there to keep you accountable,” Weinstein said.

Each studio will be between 2,000 and 3,000 square feet. One of its advisers is a top architect at Lundberg Design in San Francisco, who’s provided the creative direction for the look. Each studio can be built out in just 60 days, he said.

“Everything we do should reinforce visually how unique the concept is. It’s our responsibility as entrepreneurs and business builders. From the type of technology used to materials in the studio," he said.

The company has 10 employees, with four coaches. The corporate team can stay relatively small as the company ramps up from one to a few hundred studios.

“A lot of it is powered by computers crunching numbers and handling customized user accounts,” Bergeron said.

The team is already spread across the county.

“As we are opening up these studios we are seeing coaches as really important," Bergeron said. "As we expand we will need to be there and identify with people we think are fantastic and can coach intelligently.”

Finding someone who can rev up Fitwallers to come in at 6 a.m. before work is key.

SoulCycle, a wildly popular workout routine that started in New York City and has since spread across the country, has revolutionized stationary bicycling through pumped-up instructors and energizing music.

“We need to try to replicate that within our unique team here,” Bergeron said.

Manhattan was selected as one of Fitwall's first markets because some of its team has been successful in New York real estate and 10 target areas have already been mapped out.

“Our knowledge of New York will help out in that way," Bergeron said.

Soon Los Angeles-based celebrities will be able to get their feet on Fitwall. The company is scouring spaces in West Hollywood, Santa Monica and Culver City.