In a sea of tablet accessories, Modus III stands away from the pack, transforming a wobbly iPad into a stable laptop workstation.

What started as a rudimentary drawing on a taped-together piece of paper a couple years ago has evolved into two prototypes that are ready for production. To get to that point, a $100,000, 30-day Kickstarter campaign will launch Tuesday.

Modus III, which means “the way,” encompasses the tablet, keyboard and smartphone. At 2.4 pounds, Modus III weighs a few more ounces than its ClamCase competitor, but it's still sleek enough to fit into a 15-inch laptop sleeve.

“We've wrapped it into this stylish, elegant package,” Sherman said.

Sherman was inspired to create the 15.25-inch wide Modus III workstation when he spotted a tech dilemma a couple years ago: Many business apps were coming to the iPad, but the thin and compact tablet created an uncomfortable work environment. The blanket solution — small, attachable keyboards — didn't help much. 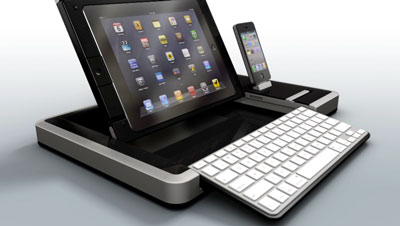 The patent pending ErgoTrak allows users to adjust to the perfect postion for the environment. Photo courtesy of Modus III

"They are very cramped and don't lend themselves to getting real work done. The shift key is as big as other keys. When you're ultra-mobile, you sacrifice productivity," he said.

But once an iPad is clicked into Modus III, it's easy to switch to mobile free-hands mode. With one click, a lightweight, protective case housing the iPad pops out.

The company will launch its e-commerce store as its Kickstarter campaign is ending. The first shipments are expected out the door by the end of the year.

"The great thing about Kickstarter is you know how many you have to make exactly — and then we will add e-commerce orders to that," Sherman said.

Kickstarter exposure could result in a distribution deal with a big-box retailer.

“As far as retail positioning, we are not entirely opposed to it, but it will have to be a pretty sweet deal,” Sherman said.

An adjustable-angle smartphone docking station, with iPhone and Android adapters, enables dual-screen multitasking. That means users can Facetime on an iPhone while typing notes on the iPad.

Lightning, 30-pin and micro USB adapters are included, and strategic storage space enables power cords to spill out and charge up.

"You can wall-charge everything while inside Modus III. It's almost like no drop-off from working on your Macbook Pro," Sherman said.

The team wanted to create a “premium environment” to work and type; that meant creating an ergonomic track to tilt the iPad to optimal viewing angles. The "ErgoTrak" patent pending slide rail system enables tablet and keyboard adjustability 7 inches front to back. 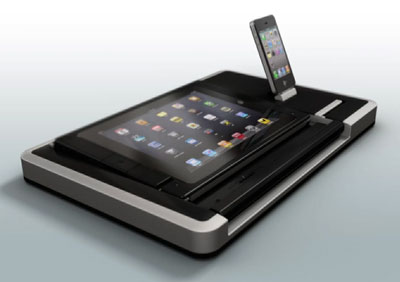 A front-facing speaker enhancement feature redirects the sound from the iPad's back speaker, creating a mini-amphitheater effect. Modus III comes in classic black, carbon fiber, gloss white and wood burl finish. For an extra charge, users can imprint a photo or logo.

The launch model fits the iPad 2, 3 and 4, which become fully functional once clicked into place; Modus III has integrated volume and power buttons to control the iPad.

Apple continues to dominate the tablet space, but the modular shell will be able to accommodate Samsung and Windows tablets, too.

The team has spent more than a year refining, engineering and completing the design.

Modus III's product development partner, Scottsdale, Ariz.-based Hotwire Development LLC, is a 15-year veteran in the mobile computing space that has a manufacturing relationship in Taiwan.

"They've developed products of their own so they can take our prototype — which they built — and oversee all tooling and manufacturing right through production," he said. "So we are in really good hands for a brand new product — and we are a startup."

Hotwire has an arsenal of awards in its tool chest, including ones from the International Consumer Electronics Show for best product design and PC Magazine's Best of Comdex award.

At the annual tech convention in Las Vegas in January, Sherman and Peterhans met a key mentor — a founder of San Francisco-based The Brydge, an aluminum keyboard for the iPad. With $800,000 raised, the successful product is among the top 20 Kickstarter campaigns of all time.

"He sat with us for an hour and a half and told us everything he knew about Kickstarter and how to succeed and how to do this and that," said Sherman.

At that time, Sherman and Peterhans didn't even have their prototype yet; now their own Kickstarter campaign is set to launch this month.

The Brydge's founder wrote the team in July, saying: "Congratulations. I am going to be watching you."

Sherman and Peterhans realize the market is saturated with iPad case and accessory makers like The Brydge. Modus III's website lists the main players in the space, including Belkin and Zagg, and checks the features that Modus III has that other cases don't.

While the Zagg Keys ProFolio+ retails for less at $129.99, it lacks many features the Modus III has, such as the ErgoTrack and smartphone docking station.

"We have something different. Yes, there is competition, but they don't do exactly what Modus III does — yet," Peterhans said.

Peterhans and Sherman have so far put all the capital into the business themselves. Peterhans, who's in the financial consulting business, is no stranger to running startups; he has about half a dozen others under his belt.

One of team's design decisions was deciding whether to put a handle on Modus III.

"We decided against it because it's just another level of complexity for engineering," said Sherman.

Modus III functions somewhat like a suitcase, however; under the keyboard lies room to stash papers and documents.

During market research, the two discovered that doctors love the device. They use an iPad to see patients and then go back to the office to type notes in Modus III mode.

Other professions that are on the road and mix client face time with desk work, such as insurance sales teams, are on board.

"So anybody who travels and has an office, it's probably good for that. Someone said, 'I want two of these so I keep one at home and one at office, and I just carry my iPad with me,'" he said.

While the keyboard is Apple-quality caliber, Modus III was purposely designed to avoid needing special permissions or certificates from the tech giant.

"We would have if we included the cord that feeds through. Then we said, ‘Why would we do that? People have their own cord anyway for their iPhone and iPad,’” Sherman said.

In the concept-refinement stage, the group considered a one-size-fits-all approach, but decided against it.

"That never works with any product. It ends up being a train wreck to try to please everyone," he said.

If the dimensions are different on the iPad 5 — Apple is reportedly testing a 13-inch model — the team says it can quickly create a different shell that fits.

"You don't have to buy a Modus III all over again," Sherman said.

Awesome! I want the one with the gloss white designer finish! I'll be backing it on Kicksarter.