The event was sponsored by the city of Murrieta's economic development department in conjunction with Tech Coast Angels (TCA) and Jay Goth of the TriTech Small Business Development Center /Red Tail Capital.

The Murrieta event brought angel investors and local, innovative companies together. Angel investors are individuals who provide capital for a business start-up, either as debt or equity investments.

Twelve start-up companies located in the Murrieta Valley presented to TCA during the meeting. This included companies as diverse as Annam Biosciences based at the Murrieta Innovation Center (the city of Murrieta's business incubator) and San Diego, which is developing drug technologies in the fight against cancer; Ambassador Energy, a Murrieta-based solar energy company; Lockstrap, an area company that produces locking tie-down systems for equipment, as well as other startup companies including 3 B Street, Baby Junk, Straight- Dyne, DDR Professional Services, New Frontier Technologies Group, Roommatfax.com, and Estimator 4U. 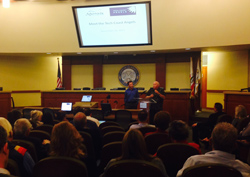 Each company had the opportunity to make a three-minute presentation, with questions and answers to the angel investors. The event was billed as an educational opportunity for companies to learn how to make presentations to angel investors and for Tech Coast Angels to learn more about the growth of innovative start-up companies and investment opportunities in the greater Murrieta Valley. 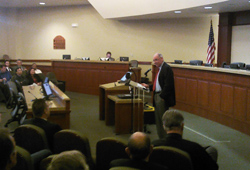 Murrieta Mayor Rick Gibbs opened the meeting by welcoming the entrepreneurs, angel investors and other attendees, indicating that Murrieta is focused on encouraging the growth of entrepreneurship and start-up companies as a key city economic development objective. Jim Butz of SoCal EED -- a nonprofit organization -- described the Murrieta Innovation Center which is the City's business incubator located at the former Murrieta city hall. 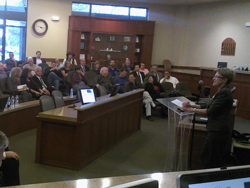 "Murrieta believes that the success of the economy is in encouraging start-up businesses like yours to succeed," Mayor Gibbs said to the gathering.