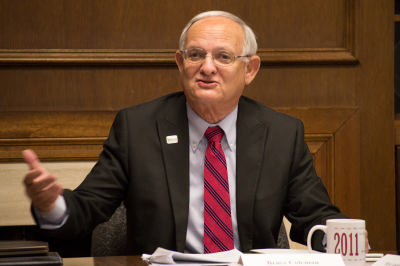 San Diego’s reputation as a hub of innovation has been growing in recent years, with the Organization for Economic Cooperation and Development naming it the second most innovative city in the world in 2013 for patent intensity.

While the spotlight hasn’t shined quite as brightly on Murrieta and Temecula an hour north, the two cities have been creating a similarly welcoming environment for entrepreneurship, and say what they need most is people and innovators to take advantage of all the cities have to offer.

“One of the great challenges that we face is that we’re not known all that well, and yet there’s a lot of stuff going on,” said Bruce Coleman, economic development director for the city of Murrieta at a recent Daily Transcript roundtable. “We really need to make sure that people realize this is a lower cost location for manufacturing, lower cost location for setting up a business, that there are resources here and we really want to try to help people.”

Coleman said the city is willing to work with any size company in any sector, though Murrieta is actively targeting early-stage startup companies in the tech, health care, digital media and advanced manufacturing industries. This effort to create an entrepreneurial ecosystem is in its early stages, but Murrieta and Temecula are already seeing success.

“The microclusters are starting to form in biotech, communications, software and agribusiness,” said Steve Austin, firm managing partner at Swenson Advisors and chairman of the board of the World Trade Center San Diego. “There are probably a half-dozen microclusters, and that’s been so critical to San Diego in terms of wireless and life science and software. So we’re trying to keep that clustering momentum going and enhancing that as a natural phenomenon.”

The city has also actively engaged the Murrieta Valley Unified School District to help enhance its STEM educational opportunities and expose more students to the advanced manufacturing in the area, so that once the startups hit their growth stage there will be a base of skilled employees to hire.

In addition to the primary and secondary schools, the University of California Riverside and Loma Linda University Medical Center are also assets.

“One is the entrepreneurs themselves, which I think we already have. The biggest problem is giving them opportunities to stay in the area. Second is the mentors. We’re finding those mentors have started all sorts of companies and are area mentors like CPAs, lawyers, that sort of thing. And then, obviously, the third thing they need is finance.”

Among the educational institutions, more than 80 known startups, a high percentage of the population wanting to start a company, more than 1,000 patented investors and several hundred acres rezoned and designated for a technology park, the missing puzzle piece is wealthy individuals willing to invest locally.

“One of the things that I see in Boulder and Denver that is not prevalent in Murrieta is the local capital wealth is not forthcoming,” said Don Warriner, founder and managing partner of VentureWest Partners LLC.

“I think that the challenge in Murrieta is bringing the local successful people that live there — and we know there are a lot of them — bringing them into and educating them into what the opportunity is. It’s hard to get some guy from Orange County who’s got a billion dollars, and get him to drive to Murrieta and want to invest his money there, so the challenge I think is somehow attracting the local capital, the local wealth.”

Most roundtable participants seemed to agree that the much-anticipated crowdfunding platform for startups seeking funding won’t be a reliable alternative to attracting individual investment.

“It was supposed to make it easier for people to raise money, but I think ultimately it may become more difficult because there’s two things going on: There’s the crowdfunding, and then there’s the general solicitation rules,” said Jay Goth, principal of TriTech SBDC.

“And what general solicitation means is anybody raising money today can put an ad out or put up a website saying ‘We’re raising money for our company,’ and the problem is if you do that, you open yourself up to a whole new set of regulations that you don’t have if you go out after private money the traditional way of doing a private placement and dealing with accredited investors that way.”

Austin said the existing startups are mostly getting funded by friends and family, but recent program additions are starting to change that, though a stronger connection to San Diego is needed, at least in the beginning.

“We’ve launched the Springboard program officially in Corona about a month ago with the InSoCal Connect program, and the great thing about Springboard is they have a very formal process, a tool that actually helps these 80 companies have a chance of being successful, to kind of ferret out the ones that are going to be weak and look at a half-dozen or so that are going to be successful,” Austin said.

“The reality is that there are tools and formalities coming together but I think one of the realities is that while we don’t have a big technology base, we do have San Diego as close to home as possible, not an unreasonable commute, even more reasonable than Orange County or L.A, and that umbilical cord has to kind of reach a little further north to help this program along.”

In addition to these more business-oriented associations, George Bennett, chairman of Valley Innovators and a serial inventor with 49 patents, said he and a dozen other retired engineers run an informal group for young or new entrepreneurs to vet their concepts and connect them to mentors or whatever help they need.

A key component to this group is the non-disclosure agreement attendees must sign, so inventors are protected from intellectual property theft.

“This is what the collaboration is — there’s a lot of that in Murrieta, it’s just happening behind the scenes, because people still don’t know exactly how to get things developed without giving away their inventions. They’re private people,” Bennett said. “But it’s happening and we’re seeing that growth happen right now. It’s a very exciting time.”

Joseph Mignone, president of Southwest Riverside County Manufacturing Group, agreed that growth is happening, and said the biggest challenge from his perspective is informing people about these advancements.

“I feel up there we’re very strong with the resources that are necessary to establish your businesses and to see them get launched and move,” Mignone said. “But how do we communicate it to people? That’s I think one of the big problems that we have, because there is no media, not even a radio station or something to let people know what’s out there other than putting up a billboard somewhere.”