How sweet it is

With a network of more than 100 million users and its app distribution and recommendation platform installed 50 million times, chances are high that you’ve interacted with SweetLabs’ products in one form or another, but did you know that the venture-backed startup behind Tweeki and Pixsta is based downtown on Market Street and Fifth Avenue in the heart of the Gaslamp Quarter?

Though the company was founded in 2008 and has since received $21.5 million in venture funding from Google Ventures, Intel Capital, Bessemer Venture Partners and O’Reilly Alpha Tech Ventures, and experienced 100 percent year-over-year growth in 2013, Senior Marketing Manager Alan Masarsky said SweetLabs still views itself as a startup, and functions with that high-growth mentality.

One of its mainstays nowadays is Pokki, a real-time app recommendation platform that serves to counter several problems in the industry. The concept behind Pokki, which is downloadable by consumers but also now preloaded onto Lenovo and Acer Windows and Android devices, is essentially a more intelligent version of iTunes app recommendations.

“So imagine a device is like a store, or storefront, and you’ve got shelves all over the store, all of which can be filled up with apps,” Masarsky said. “What we do is we’re the guys behind the scenes that are filling up those shelves with the right apps and we can recommend apps in real time. Other app stores just kind of have their applications here and they’re kind of static, so there’s this inventory problem where you can’t change the applications that are being displayed in real time.” 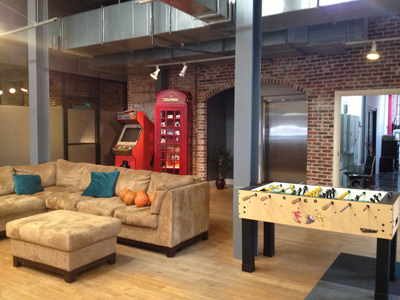 Masarsky said this alleviates pain from two major trouble points -- monetization for device makers and commoditization of PCs. The former issue, dubbed the “value trap,” with device prices dropping and device manufacturers’ margins dropping with them, is solved through a revenue-sharing stream, with the manufacturers getting a cut of all the apps downloaded via Pokki.

The real-time recommendations help to alleviate the second problem.

“A lot of these device manufacturers are investing millions of dollars in new-form factors: two-in-ones, convertibles, they do all these cool different shapes, sizes and also forms,” Masarsky said. “So if I bought, say, a new table-top PC that I wanted for my family, and I lay it flat on the table, and you could play these cool games like Monopoly -- when I open the app store, it’s going to recommend apps that aren’t even compatible for the device, or made for that form factor and what it’s in. So what we do is recommend apps in real time based on how, where and when they’re using the device. So if you’re in lay-flat mode, we’ll recommend different apps.”

The company initially focused on the PC because of a lack of innovation there.

“We realized there’s a huge void, especially in innovation on the PC, where people really like what they have on mobile devices, they’re comfortable with it, and especially iOS or Apple, but with Windows there’s a really big gap, and that’s where we started innovating six years ago,” Masarsky said. “And so what we did was we brought this kind of mobile-like app experience to desktop applications.”

Developers pay SweetLabs to add their apps to the Pokki distribution system, and all apps are then free to consumers.

Masarsky said SweetLabs is now working with developers to help them set up apps in their platform, and is looking toward providing more white-label solutions so developers can create their own app stores, using Pokki as a recommendation layer in their own marketplace.

On a broader scale, Masarsky said he believes the startup community in San Diego faces three main challenges: a lack of general startup education, not enough tech-focused media, and a major recruiting problem with talent being plucked by companies in the mecca up north or by large corporations.

SweetLabs is working to get more involved in local schools to increase knowledge of what it means to be an entrepreneur and work in a startup, and serves as a mentor to early-stage local companies.

The two-floor, roughly 14,000-square-foot office downtown features two fully-stocked kitchens, a play room of sorts with a foosball table, lounge rooms, pool tables, space for a portable basketball court, a shuffleboard table, and its newest addition, a kegerator, a device that dispenses beer.

Masarsky said this culture of creativity and fun is one reason SweetLabs has an “incredibly high” employee retention rate.