When it comes to cloud computing, there sometimes are more questions than answers.

Even the definition is up for debate.

According to the National Institute of Standards and Technology's definition: “Cloud computing is a model for enabling convenient, on-demand network access to a shared pool of configurable computing resource (e.g., networks, servers, storage, applications and services) that can be rapidly provisioned and released with minimal management effort or service provider interaction. This cloud model promotes availability and is composed of five essential characteristics, three service models and four deployment models.”

But even NIST says this definition is evolving and will be changed by “spirited debate by the public and private sectors.”

While not all agreed on every aspect of the cloud, they did agree that it is the next big technology step for both commercial and government realms. But it will take time and more guidance to fully realize the cloud’s potential.

There still are issues of security, trust, governance and timing to work out. Some trailblazers in both business and government are overcoming those obstacles as they go.

Others are weighing their options and deciding how much of a risk to take.

Benito Hobson, director of business development for San Diego-based Integrits Corp., pointed out that for some companies, such as an information assurance firm, the cloud is not yet perceived to be secure enough to prove to clients their information is safe.

To mitigate the risks, Scott Dowell, enterprise technologist for the Navy & Marine Corps Technology Center at CSC, said he is seeing some people only pushing a few applications into the cloud at a time. 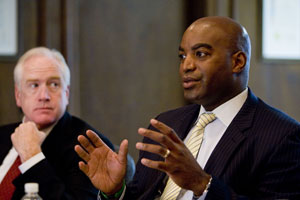 They might put one testing program into the cloud, but they will keep their financial systems, for example, on internal boxes.

“You gotta be smart,” Dowell said. “I don’t think anyone is moving 100 percent into this cloud bit right now.”

Dowell said studies indicate that in general, there likely will be a migration from current practices, to a private cloud, to pushing a few applications into a public cloud and eventually having a large cloud presence.

In the government realm, the Defense Information Systems Agency (DISA) is promoting its Rapid Access Computing Environment (RACE) where a company can “customize, purchase and receive your platform within 24 hours,” according to the agency’s Web site.

Just as companies will need to decide which applications to push into the cloud, so will the military. Roundtable participants said it will be important to identify the capabilities and applications that would benefit from the cloud versus those that are better kept out of it.

And if an application does move to the cloud, there must be enough capacity to support it even in the most high-demand situations.

How to plan for ultimate capacity demand is a question that will need to be answered in all cloud environments.

Proffer said it will be important to “keep dynamically looking at that, because things change, demand changes, type of demand changes,” and the available capacity to meet that demand will need to be adjusted accordingly.

In the case of the Navy’s Consolidated Afloat Networks and Enterprise Services (CANES) program, which Matthews said is setting up for a private cloud environment, it will be imperative to provide enough capacity to allow the warships to conduct their missions effectively in a high-demand situation.

“Because while you can expand and contract within the cloud, within the overall cloud especially in afloat settings, that needs to be properly modeled,” he said. “Fail to do that, and you have a huge problem.”

Send your comments to Erin.Bridges@sddt.com