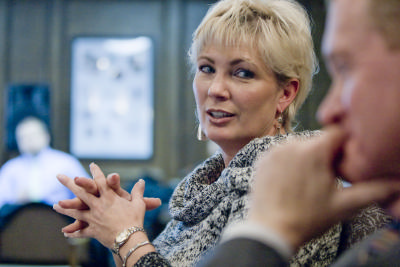 Changes in government contracting are coming down the pipe from the top levels of federal government in what industry leaders say are part of the standard pendulum swing.

Right now we are near an extreme on issues including contract structure, organizational conflict of interest (OCI) and insourcing.

President Barack Obama has said he will push to reduce fraud, waste and abuse in government contracting. And while that is widely considered to be a good thing, it also puts some hardship on businesses.

These issues were discussed during a Jan. 22 roundtable at The Daily Transcript sponsored by Crowell Moring.

"I think everyone would agree that less fraud, less waste and less abuse lets our taxpayer dollar be spent better," said Erik Basu, president of Sentek Global. "And it gives you pride in your profession. Nobody likes to see a contractor that's out ripping off the government.

"On the other hand, having additional restraints like having to verify your tax returns against whatever you bid for a contract -- it simply adds to the cost of doing business."

One way the government hopes to eliminate waste is by issuing more fixed-price contracts. It is unlikely, however, that such policies will affect many San Diego businesses that work more in the services arena.

Tony Nufer, president of the San Diego Military Advisory Council, said he sees fixed-price contracts being used as a solution for products while services lend themselves better to cost-plus contracts, as is done now.

In situations where a fixed-price contract is possible, the government can benefit because the risk is on the contractor. And John Metzger, deputy program executive officer for acquisition management at SPAWAR, said contracting officers are seeing incentives to go fixed-price.

But Metzger said there also is a push for more realistic contract schedules. He said he hears from contract officers that the process takes too long.

"What takes too long is the devil is in the details," he said, adding that building in realistic schedules will help resolve that problem.

From an industry perspective, realistic schedules are a must.

Ken Slaght, president of the San Diego chapter of the National Defense Industrial Association, said the timeline is important, especially when considering additional delays from new measures put into the process.

Small businesses often suffer from incorrect timelines because they rely on contract funding at each stage to stay afloat. But large businesses also take a hit when schedules are not realistic.

"From the NDIA view, even large businesses, at the end of the day, have to say something to the street," Slaght said. "It's all about the ability to forecast about government contracts."

Another change in contracting is an increasingly strict interpretation of OCI policies, roundtable participants said.

"I think there's a tendency to over-simplify and be afraid of OCI," said Donald Sovie of law firm Crowell Moring. "It's a legitimate government interest to require of vendors that they identify and report. That doesn't mean they absolutely cannot participate, especially if they have different segments of business, because you can do firewalls."

The problem, he said, comes when businesses wait until the last minute to deal with OCI issues. At that point, it often is too late, he said.

Dan Dufresne, director of government relations for Epsilon Systems, said his company has had success streamlining its process to deal with OCI and mitigate problems up front.

Shirley Adams, president of the San Diego chapter of the Armed Forces Communications and Electronics Association, said a better approach is to take a deeper look rather than consider OCI a black-and-white issue.

"That's where you're going to create a win-win is if the deeper look is taken and analysis done, because it could well be a benefit if you have a company working on what is now considered both sides of that fence," she said.

While the practice until recently has been to mitigate OCI rather than eliminate it, Nufer said a zero-tolerance policy is creeping in.

"Right now (the pendulum) is swinging slightly further to the extreme before it swings back," said Tom Kruza, an associate at Crowell Moring. "Just now there is a rule being proposed where conflicts of interest are going to be evaluated on a personal level."

Trelli Davis, assistant program executive officer for contracts at SPAWAR, confirmed that personal conflict of interest policies are in the works, though no policy yet is in place.

Another layer of change and part of the pendulum swing is insourcing. Some industry representatives were surprised to hear leaders at SPAWAR cite a smaller number of insourced jobs than they had expected.

Davis said about 30,000 people across the Department of Defense will be hired as a result of insourcing. Of that, only about 3,500 will join Navy commands.

And Metzger said they primarily are "inherently government positions."

They key to overcoming any potentially negative impacts of these changes, some participants said, is communication between industry and government.

In San Diego, those lines of communication between government and industry exist. Several participants said the problems they experience with contracting agencies around the country tend not to be an issue in San Diego, where much of the local defense industry competes for work with SPAWAR and SPAWAR Systems Center Pacific.

Leadership in industry and in government makes efforts to reach out to each other and solve problems.

While participants agreed the state could do more to keep businesses here, for now, San Diego remains a desirable place for government contracting at least in part because of its ability to set an example for how to do business better across the country.

"I'm absolutely amazed; you look around, and every time you show up to symposiums or have the opportunity to really dialogue with industry and government, it really tends to be a close-nit, well-networked microcosm," NDIA's Slaght said. "We are the right size around here where you can really get your arms around it."