By PADMA NAGAPPAN, Special to the Daily Transcript
Tuesday, February 2, 2010

Spending 25 years in the Navy as a pilot has conditioned John Pettitt to waking early, working long hours and taking naps when he can find time.

As the corporate lead executive (CLE) for defense contractor Northrop Grumman in San Diego, he is the public face of the company and the go-to person who coordinates the relationships between the company, the military commands and the community.

He has been with the company for 15 years and at its San Diego office for the last 10 years. Before coming here, he was based at the Naval Air Weapons Station at China Lake, about 150 miles northeast of Los Angeles.

"I can get a day's work done in a couple of quiet hours. I do my heavy-duty thinking then, make my East Coast calls. I've always been an early riser," Pettitt said. 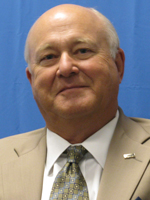 Northrop has five sectors: aerospace, electronic systems, information systems, shipbuilding and technical services. Each sector reports up vertically, but not to a central authority.

So the company has CLEs in several cities in the United States; executives like Pettitt who act as cross-sector coordinators and are the first point of contact for the media and customers, for queries about which department to go to and whom to approach.

"I make sure we don't stumble in front of customers, just because our right arm does not know what the left is doing," explained Pettitt, who is assisted by a staff of one, an executive assistant. Pettitt reports to the senior vice president for government relations.

In San Diego, Northrop has more than 4,000 employees, about 100 suppliers and $1.5 billion in revenues. About 2,000 of those employees work in the information systems sector, another 1,800 work in aerospace, about 400 focus on shipbuilding and a very small contingent work in electronic systems and technical services.

The information systems sector is headquartered in Herndon, Va., but has a large presence here, specifically in Rancho Carmel and Kearny Mesa. The aerospace sector has its headquarters in Los Angeles but the unmanned aerial vehicle (UAV) division is located in Rancho Bernardo.

Local customers for Northrop include the SPAWAR command, PEO C4ISR, Naval Special Warfare Command Pacific and other divisions of the Navy.

"SPAWAR is the main reason why we are here," said Pettitt, who acts as the San Diego facilitator for Northrop's executives, arranging meetings with the local military community.

The UAV division is the most visible portion of Northrop's defense business in the city.

"We are world class in the unmanned area. We pretty much have the high altitude market. We have competitors in the middle market, but we are not really in the low-end market," he said.

While the UAV division gets most of the press and public's attention, the information systems office actually has a larger presence and handles defense as well as non-defense related projects.

Growth areas where the company will give more emphasis include network and system cyber security and network communications security. Pettitt said that business would also grow in the underwater and surface to air segments.

Speaking about the company's relocation of key executives to Washington D.C., Pettitt emphatically stated that it would not affect what the company does here in San Diego.

He explained that the company has about 30,000 employees in California, out of which about 200 executives are being moved to the East Coast, mainly to be closer on a daily basis to decision makers at the Pentagon and Capitol Hill.

Pettitt likened the pool of small business defense contractors in San Diego to cities such as Huntsville, Ala., Charleston, S.C., or even in Los Angeles, but said the city has an advantage in terms of good universities and an entrepreneurial mindset.

"We have a large pool of high-caliber people that are very important to Northrop Grumman. They are agile, which is a big advantage. Small businesses bring very niche pieces of knowledge and someone like us can take that and put it into a system," Pettitt pointed out.

He said there is a growing emphasis on off-the-shelf systems used by the government. Small business defense contractors know and understand that, and when they approach Northrop, the company taps their expertise in niche areas.

"They help bring the rates down and make us more competitive. They offer very innovative ideas and focus on so many specialized niche areas that we don't focus on," he said. He added that while Northrop does have suppliers it has worked with for a long time, it will also approach new companies if they have a particular niche product or system that it needs.

The company has a small-business department, which works with current and potential suppliers on qualification, eligibility and financing. It also has in place mentor protégé programs that help grow the engineers and leaders at these companies.

Northrop also is interested in cultivating the next generation of engineers.

Pettitt said he has close relationships with deans of engineering departments at local universities, including SDSU and UCSD, and that Northrop has internship programs in place at those schools. He also sits on the president's board at CSU San Marcos.

"We are very concerned that American universities are graduating fewer and fewer engineers," Pettitt said. "Our company is based on technology. We put a lot of effort into serving on governing and national boards, and exploring this issue. We have engineers who donate time at middle schools, to show kids that engineering is fun."

While many entities have been tackling this ongoing problem, Northrop has devoted considerable manpower, money and time to address it.

In February, its employees will take part in a Science Bowl challenge, competing with students from Lincoln High School, as part of the science, technology, engineering and math (STEM) program.