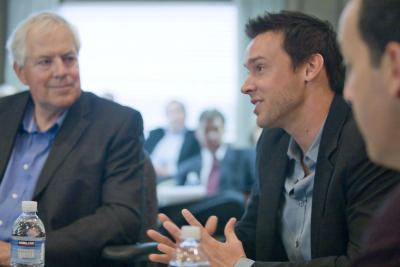 Capital is available, even if the financing environment has changed, agreed local biotech and tech executives at a recent roundtable at the Daily Transcript offices.

"Companies with good credits, cash flows and so forth still have access to financing, but certainly companies that are on the risky side, don't have revenues yet or are just developing products -- it's a big challenge for them."

Many of the participating executives at the roundtable, sponsored by financial consulting firm Q5 Group and law firm Stradling Yocca, shared stories of obtaining capital in the midst of the downturn through what many regard as fairly traditional means.

Their experiences appeared to contradict industry tales of having to turn to so-called nontraditional and "creative" financing routes to fund operations.

"Not very sexy, but it gives us a ton of flexibility," Fogliani said. "We're kinda old school: profitable, putting the money back into the company and sharing some of that pain with the bank -- and paying incredibly low rates, which is a lot better than giving up ownership in the company."

CEO Jon Carder of MojoPages, which blends a business directory with online reviews, could boast of what has become an increasingly rare phenomenon: a $5 million investment from a venture capital firm, Austin Ventures, that closed mid-2009 with standard strings attached.

"You just have to find the right firm that has the capital and is interested in taking advantage of some of the companies that are down here," Carder said.

Redhorse Corp., which provides information technology, energy program management and intelligence services to the defense industry, secured a Small Business Administration loan from a community bank -- after its former bank asked it to put up cash as collateral, said CEO David Inmon.

Inmon's remark drew laughs from around the table, but also reflected that the credit environment and access to capital has indeed changed: It may not be the parched well it was a year ago, but those holding the money are less willing to part with it and often have stricter requirements for when they choose to do so.

Angel investors, long an early funding source for startups, have been heavily affected, according to Carder. He said a number of angels had expressed interest in MojoPages but pulled away as their net worth declined.

In a still-weak economy, investors want to see companies trimming expenses and focusing on their core operating businesses -- which can cramp plans for growth and development.

Gardner emphasized that having a relationship with investors is important; a company's management can distinguish the company from the competition.

Evidence of a changed funding environment is perhaps most evident in the world of venture capital, which roundtable participants discussed at length.

Venture capital has traditionally been a steady source of financing for startup companies, particularly in the life sciences and technology industries. Most VC firms aim to be relatively short-term investors, providing companies with the money they need to get to a so-called liquidity event, or exit, in which VCs get their cash back and then some.

Exits usually come in the form of an initial public offering or an acquisition. In the past, many companies have preferred IPOs, since management can enjoy both a return and continued equity.

But volatile markets have made IPOs few and far between in recent years, effectively lengthening the time from Series A to exit and causing many VCs to change their approaches to investing.

Carder of MojoPages noted that many VCs now expect companies to be stable and have cash on hand as well as plans for positive cash flow -- even in Series A rounds.

Some VCs are choosing to take positions in public companies instead, which has made the battle for capital that much fiercer, said Q5 Group CEO Mike Rose.

"There's still such good buys on companies that are already public," he said. "It's another level of competition for the IPO dollar."

"It's out of fashion to have a small or reasonably sized IPO. Now an IPO has to have much bigger metrics in terms of deal size and revenue at the company, etc., than used to be the case," said Hayden Trubitt, a corporate attorney with Stradling Yocca.

In the meantime, mergers and acquisitions have become the preferred alternative for exits. Radak noted that his company, Quidel, is in the process of acquiring Diagnostic Hybrids, which considered the IPO market but instead opted to merge.

Executives at the roundtable also named other sources of capital in case traditional methods have been exhausted.

For biotechnology companies, partnerships have become a strategic play, as smaller companies can turn to larger companies to help them fund programs or provide a sales force. Another strategy has been seeking out overseas investors.

Also, there are some venture debt firms that will provide money alongside venture capital, Plante said. Regardless, executives at the roundtable said the environment has improved since last year, and many in the business community are more optimistic.

John Prunty, chief financial officer of Optimer Pharmaceuticals, described an "upbeat" mood at JP Morgan's annual Healthcare Conference in January -- among the largest industry gatherings -- and noted that one company, ZymoGenetics, was able to raise almost $100 million in the public markets in the early weeks of the year.

"That was the first time in the last four or five years" that had happened, Prunty said.

And, of course, most entrepreneurs are naturally optimistic, Inmon said.

"There's a cycle to this; we can't stay down forever," he said. "At some point, the curve goes up."